Virgin Australia is all but certain to report yet another underlying loss for the year ended 30 June, as it continues to struggle against its high-flying competitor Qantas.

Of the two airlines, Virgin is due to report its financials first, on 10 August, while Qantas’s numbers are due later in the month.

While it has turned from half-yearly to quarterly reporting since late 2014, Virgin has skirted around disclosing its final quarter results. In a trading update released on 3 July, it gave updates on its cash flow and the performance of its Velocity loyalty business. On profit, however, it said only that it expects the underlying profit for the fourth quarter “to improve on the fourth quarter of the 2016 financial year”.

That is little comfort to the airline’s long-suffering shareholders, which have seen profits fall – or turn to losses – during the previous three quarters. Thus, it appears a full-year operating loss is all but inevitable. 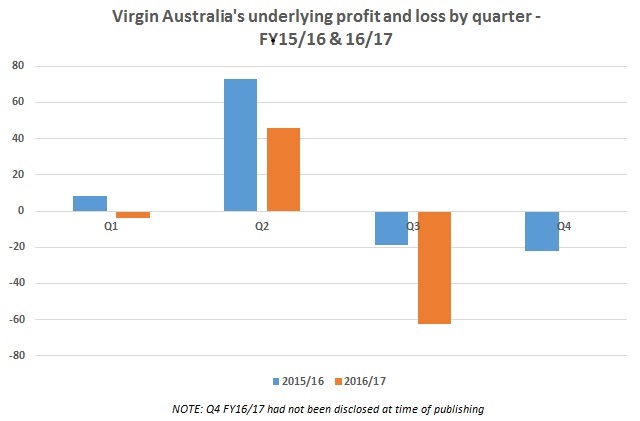 Its net result is likely to be an even heavier loss, with the airline previously warning that it will take charges during the year related to its fleet disposal, and other extraordinary items related to its Better Business restructuring programme.

Thus far, the carrier has withdrawn most of its Embraer 190s, with the remainder to be transferred to new owner Nordic Aviation Capital later in the year. Similarly, it has started to move up to eight ATR 72s out of the fleet, with two -500s already ferried across to Nelson, New Zealand, for storage.

Virgin has consistently pointed to poor sentiment in the Australian market that looks to have dragged on. During the latter half of 2016, a looming federal election sapped business confidence, which further affected an already slow market.

The carrier has responded by trimming capacity across its domestic network, with some widebody capacity now deployed on international routes. Some routes, however, have seen capacity increase as the airline back-filled its smaller E190s with larger 737s. To help balance those out, it has adjusted frequencies, and broadly capacity and demand have moved together. 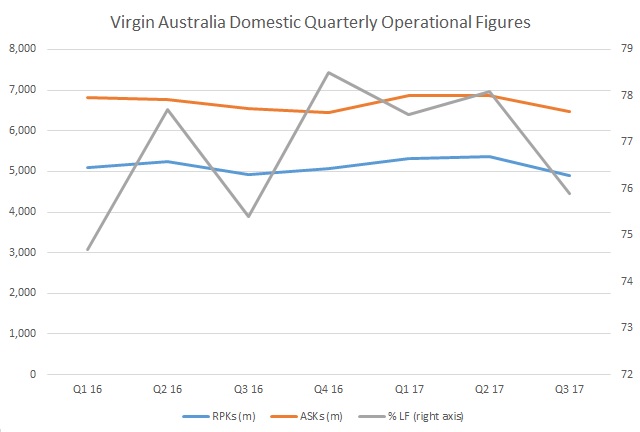 Qantas has been much more buoyant in its outlook, and recent commentary seems to indicate that it sees itself at – or even moving past – the bottom of the cycle.

Virgin has also suffered over the regulatory kerfuffle with Indonesia that effectively blocked its Tigerair Australia unit from operating flights to Denpasar earlier this year. Expensive relief flights and a major decline in the budget unit’s revenue are unlikely to have a material impact on its results. Nonetheless, it will be worth watching to see if there are any knock-on impacts on its plans to switch over its fleet from A320s to 737s.

CHANGE AT THE TOP

The sudden departure of John Thomas as group executive Virgin Australia Airlines in July could also be some cause for concern. He joined the carrier in September 2016 from LEK Consulting, and took a guiding hand in the fleet reduction, while also looking at opportunities to boost revenues from the mainline operations.

Thomas quickly dropped plans for Virgin to fly from Perth to Abu Dhabi. The Airbus A330 capacity for that route was instead reallocated to the Melbourne-Hong Kong service that started on 5 July. He also introduced a new “Economy X” ancillary product, which by all accounts had been well received – and has proven financially viable.

"We paid back the investment in the first two-and-a-half-weeks," he told FlightGlobal in June at the IATA annual general meeting in Cancun.

Further developments on the ancillary front were planned, with Thomas proclaiming that he was a “fervent believer” in the additional revenue streams such products bring.

Despite that strong outlook, it appears that Virgin’s board had little confidence in his ability to lead a large organisation with all the complexity of the airline. That saw a rather quick departure from the carrier, with Tigerair Australia’s chief John Sharp stepping into the role in an acting manner.

To his credit, Sharp has turned around Tigerair Australia in less time than forecast, and although it is the smallest of the four Australian domestic carriers, operates a network that manages to hold its own against rival Jetstar.

Assuming that Sharp stays in the role, he is likely to bring back some of the low-cost discipline that appears to have been lost in recent years as Virgin took itself upmarket. His operational experience should also give assurance to the board that he can manage all the moving parts of the carrier.

MONEY IN THE BANK

While the result will be an earnings bath, one upside is that Virgin sits on a pile of cash that is growing as the operation moves back into positive net free cash flows.

It must be acknowledged that most of those funds came from shareholders, with the airline raking in $1.2 billion in new equity from a rights issue, and chief executive John Borghetti’s “Hail Mary” of getting China’s acquisitive HNA Group to subscribe to a major share placement.

Nonetheless, that cash is largely accounted for already, with a A$425 million ($339 million) loan advanced by Air New Zealand, Etihad Airways and Singapore Airways due for repayment, among other debt facilities.

That means Virgin does need to show positive cash contributions from its operations to maintain liquidity. All signs are that the situation continues to improve, with expectations that the fourth quarter delivered up to A$50 million in free cash flow.

Barring the outbreak of a new round of price cutting against Qantas, Virgin should be in a position to increase its free cash flow this year. The fleet simplification should mean lower net leasing costs, and an associated fall in unit operating costs from eliminating the E-Jets.

It should also get a strong boost from the start of its Hong Kong services, which are underpinned by an alliance with a number of HNA-linked carriers. Those are helping to provide feed from greater China, and are expected to facilitate Virgin’s entry into the mainland market later this year, helping it generate profits and cash quickly.