ANALYSIS: What parts of Air Berlin can survive?

Now that Etihad Airways has elected to stop funding Air Berlin, forcing the German carrier to file for insolvency, a central question is: which parts of the business can continue to operate in the long term?

The German government said yesterday that "negotiations between Air Berlin and Lufthansa and another airline about the acquisition of business units are far advanced, so that over the next weeks a decision can be finalised by Lufthansa and a further airline".

Presumably, Lufthansa also has an interest in keeping Air Berlin operational to prevent other competitors from targeting any vacated share of the German market.

Ulrik Svensson, Lufthansa Group's finance chief, said on 2 August that further wet-leasing from Air Berlin was among various "quite different scenarios" being considered. Lufthansa confirmed yesterday that it intended "to take over parts of the Air Berlin group" and was "exploring the possibility of hiring additional [Air Berlin] staff".

Air Berlin's long-haul services appear to be among its more lucrative operations. While its core fleet has been sharply reduced under a restructuring plan disclosed nearly a year ago, Air Berlin has increased its long-haul inventory to 17 A330s. These are operated from Dusseldorf and, to a lesser extent, Berlin – two markets from which Lufthansa operates no long-haul services.

Dusseldorf was, in the past, a departure point for Lufthansa long-haul flights. The city is at the heart of Germany's most populous region, and the airport has a range of long-haul links provided by carriers including Air China, All Nippon Airways, Cathay Pacific, Etihad Airways and Singapore Airlines, FlightGlobal schedules data shows. However, less than an hour's drive from Dusseldorf is Cologne, where Lufthansa has over the past two years built up Eurowings' long-haul operation.

Earlier this year, Lufthansa confirmed that it would establish a second Eurowings long-haul base at the mainline's Munich hub in 2018. Lufthansa's strategy is to use Eurowings for direct flights from secondary airports such as Berlin, Dusseldorf and Hamburg. And group chief Carsten Spohr has previously said that the budget unit will be employed if long-haul services from such cities are established. 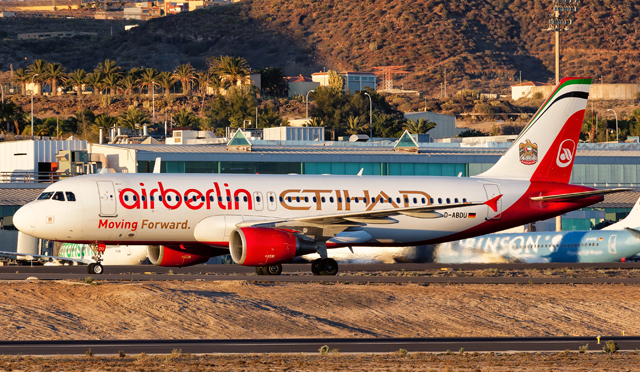 Under its latest restructuring programme, Air Berlin intended to halve its fleet to 75 aircraft and provide scheduled services via its Berlin and Dusseldorf hubs. The short-haul flights are used to feed intercontinental flights. But it is hard to see how the short-haul network could operate without the intercontinental routes – and vice versa – especially as Air Berlin's latest strategy is to be a network carrier, whereas low-costs dominate the short-haul arena.

As part of its fleet-reduction effort, Air Berlin decided to shift tourist routes to Niki and establish a new leisure airline based on the Austrian subsidiary. Aircraft and routes to southern Europe (excepting Italy), Turkey and North Africa were transferred to the Vienna-based unit in February and March, and talks were held with tour operator TUI Group, which wanted to fold its German leisure operation TUIfly into the proposed new leisure carrier. But the project was called off in June, with TUI suggesting that Etihad had withdrawn its support. "Niki is no longer available for a joint venture", TUI said.

Under the plan, Air Berlin was set to sell Niki to Etihad, which in turn would become a shareholder in the new leisure airline alongside TUI. After the partnership with TUI was abandoned, Air Berlin and Etihad said they still intended to proceed with the sale of Niki share sale. "We aim to finalise the transaction soon," stated Etihad Aviation Group's interim chief executive Ray Gammell in June.

TUI said it remained open to other joint-venture options. "A strong European leisure airline continues to make great strategic sense [as] the aviation sector is characterised by overcapacity in Germany," argued executive board member Sebastian Ebel. "We will push the repositioning of TUIfly further ahead in order to develop long-term prospects for the airline and its employees."

The group added it wanted to "contribute to the stabilisation of the German aviation market".

This might suggest that TUI could still play a role in the negotiations following Air Berlin's filing for insolvency. Air Berlin's transfer of aircraft to Niki earlier this year included 14 TUIfly Boeing 737s covered by a long-term wet-lease agreement.

Meanwhile, there is growing opposition to the German government's support for Air Berlin. Ryanair is complaining of a "conspiracy" to "carve up" Air Berlin and is taking its protests to German competition regulator Bundeskartellamt as well as the European Commission.

Ryanair believes that Air Berlin's insolvency has been "manufactured" so that Lufthansa can take over the airline without assuming debts. "Bearing in mind the scale of the market shares and the European implications involved, it is all the more important that the European Commission takes immediate and decisive action," the Irish budget carrier argues.

When the Bundeskartellamt earlier this year approved the wet-lease deal between Air Berlin and Lufthansa, it noted that several competitors had submitted comments opposing the agreement; Ryanair was vocal against the pact. But the regulator ruled in favour of the deal because "Lufthansa will not take over any of Air Berlin's slots, nor will the lease of the aircraft affect the reallocation of slots that have so far been used by Air Berlin".

The authority argued that "the lease of aircraft from a competitor needs to be assessed differently than the takeover of the competitor itself".

This would indicate that Lufthansa's intent to acquire part of Air Berlin needs to be assessed differently, and Spohr has previously acknowledged competition concerns – along with Air Berlin's operating costs and debt situation – as hurdles for closer integration with Lufthansa. Thus, it seems likely that the part-sale of Air Berlin will hinge on regulators' views.