ANALYSIS: Where does Hawaiian switch leave A330-800?

It is too early to determine whether the decision by Hawaiian Airlines to ditch its A330-800 order in favour of the Boeing 787-9 is a critical moment for the Airbus twinjet, but it certainly creates some headaches for Toulouse.

The confirmation that Hawaiian had cancelled its order for six A330-800s and signed a letter of intent for 10 Boeing 787-9s marked the end of a drawn-out saga that extends back into last year but is arguably traceable to the beginnings of the A350 XWB programme a decade ago.

Concerned about its exposure as the lone customer for the A330-800, Hawaiian reopened its widebody competition last year, leading to a new offer from Airbus of the larger, more popular A330-900, pitched against the 787-9.

Significantly, Hawaiian also chose to rebid the engines as part of the contest. And rather than transfer the A330-800's default Rolls-Royce Trent 7000s to a deal for R-R power on the 787s, it has selected GE Aviation to power the 787s. The 787-9s will arrive from 2021, whereas the A330-800s were due from August next year, Flight Fleets Analyzer shows.

Fears of being left holding an aircraft unwanted by the wider market was certainly a consideration for Hawaiian. "There are times when not having a liquid secondary market for an aircraft like [the A330-800] presents you with some challenges if you ever want to grow or shrink your fleet," Hawaiian chief executive Peter ­Ingram tells FlightGlobal. "How much success does a programme need to have before you buy it?" 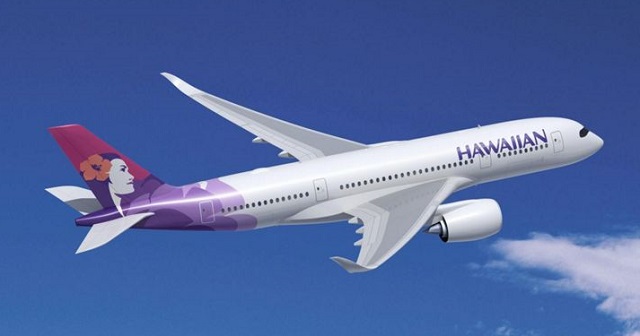 The airline is now a major A330-200 operator with 24 in service, Flight Fleets Analyzer shows.

Then-chief executive Mark Dunkerley cited the A330neo's fuel efficiency, additional range and commonality with its existing fleet of A330-200s for Hawaiian's decision. The deal was an elegant solution for Airbus, providing it with a much-needed launch airline for the smaller A330neo variant, while migrating another customer from the defunct A350-800.

But Hawaiian has remained the sole customer and so, as Airbus prepares to fly the A330-800 development aircraft (above), it is left searching for a replacement.

"We think that there's some virtue to having an airplane [that is] a little bigger," says Ingram. "On some of those markets, having the ability to add seats by flying... a slightly larger airplane – there is great economic efficiency to that," he says.

Boeing, says Flight Ascend Consultancy head Rob Morris, "would have worked pretty hard to overturn the ­A330-800 selection at Hawaiian, given the knowledge that removing the only existing customer would raise more questions in the market about the aircraft." He adds: "Airbus now has a significant challenge to find customers for the aircraft."

For its part, Airbus has been philosophical about the loss, saying "you win some and you lose some" – and confirming that the -800 test aircraft is "on track" to fly in mid-2018.

Morris points to the longer-term potential for the A330-800 to replace the large in-service fleet of its predecessor, the A330-200. "There are more than 500 passenger A330-200s, which could represent potential replacement opportunities," he says. "And the aircraft is also likely to be part of Airbus's initial strategy to bracket and address the market Boeing is aiming at with its proposed NMA [New Mid-market Airplane], with the A321neo from below and A330neo from above."

Airbus has sold 214 A330-900s and puts total demand for the A330neo family at around 1,000 units. Flight Ascend Consultancy is less optimistic, however – estimating deliveries of around 600 aircraft, with just over 10% being the -800 version.

Speaking to FlightGlobal last November, shortly after the first flight of the A330-900, Airbus's head of twin-aisle marketing Crawford Hamilton pointed to the A330-200 replacement potential: "[The A330-200] is the most popular widebody [in operator terms] – we have 95 operators, and that's a heck of a base to have," he says.

"What's missing is that the A330-200 fleet is actually still quite young. But there are prospects to replace older A330-200s and 767s in the relatively envisionable future. And you've then got to add growth into that."

So, Airbus clearly views the A330-800 as a "sleeper". The question is: will Boeing let it awaken from its slumber?