ANALYSIS: Why A330neo is still 'The One' for AirAsia X

After flirting with the Airbus A350 and Boeing 787, AirAsia X has circled back to endorse the A330neo (which comes in two versions: the -800 and -900) as the right aircraft to drive its ambitious growth plans.

True to form, co-group chief executive Tony Fernandes took to Twitter in early July, signalling that he was on his way to Toulouse to press Airbus for a better deal on the 66 A330-900s the airline ordered in 2014.

The airframer appears to have obliged – and was rewarded with the carrier announcing an order for an additional 34 of the type. The first jet is due for delivery in the fourth quarter of 2019, with the remainder to follow over the period up to 2028.

That follows a confusing set of signals from the low-cost carrier in recent years over its fleet plans, which saw it at one point indicate that it could instead opt for larger A350-900s – a type which it placed on order for 10 of in 2009, but now looks unlikely to take up.

Interest in the A350 was short-lived. In an April Facebook video, Fernandes said that it was "too expensive" and would result in fares "going up".

That brought the 787 into the fold, with rumours that the carrier was looking at a mixed order of 787-10s for its regional network and -9s to meet its long-haul ambitions.

Corrine Png, chief executive of Crucial Perspective, believes that the 787 had to be considered due to its competitiveness and popularity with long-haul, low-cost carriers, but the A330-900 ultimately won out because Airbus presented a better deal and earlier aircraft delivery slots.

"The 787 has proven to be a highly competitive and popular aircraft model, so it makes sense for AirAsia X to consider this aircraft type seriously in its procurement evaluation. At the end of the day, AirAsia X is extremely cost-focused, so its choice likely reflects [the fact] that, holistically, the deal offered by Airbus was better than Boeing's.”

Airbus claims that the A330-900 has up to 15% lower direct operating costs per seat than the 787 and has also touted the Rolls-Royce Trent 7000-powered jet's lower capital costs.

Png adds that another advantage of selecting the A330-900 is that AirAsia X's flightcrew will have an easier transition from the A330-300s already in its fleet.

While the A330-900s will bring additional range and payload capabilities, it seems that the first few aircraft will be used to gradually replace the -300s in its fleet.

Flight Fleets Analyzer shows that the group has at least nine A330-300s that are set to come off lease between 2022 and 2027. It also owns seven units that are between five and nine years old that may be due for replacement in the medium term.

That still leaves around 70 A330-900s which Fernandes says will be used for "new growth" at its carriers based in Malaysia, Thailand and Indonesia. Assuming it operates all of the new aircraft simultaneously when the last one is delivered in 2028, it would represent an eye-watering tripling of the group's fleet.

THE MEDIUM- AND THE LONG-HAUL OF IT

With new A330neos locked in, the aircraft will fulfil a long-standing dream of Fernandes to eventually resume services to Europe.

AirAsia had previously flown from Kuala Lumpur to London and Paris using Airbus A340s, but those routes were dropped in 2012, because of the high price of oil and the aircraft's poor economics.

But it will have to wait until a variant of the A330-900 certificated to a maximum take-off weight of 251t is available. Airbus says that work on that variant is under way, and will be available in 2020.

Contrary to the airline's indications, then, the first few aircraft to be delivered from late 2019 will be at the lower MTOW of 242t, a source close to developments tells FlightGlobal.

That will likely see the new jets initially focused on its existing network, probably on the longer routes to North Asia, Australasia and China, where the operating efficiencies will have their greatest effect.

Fernandes alluded to that, in a 19 July tweet, saying the A330-900s will allow the carrier to "dominate" markets such as Japan, Korea, Australia, China and India.

AirAsia X has also stated that the A330-900s will be used to return to the European market and expand its US network, which will be made possible when the 251t variant is delivered in 2020.

That includes London and Paris – the two destinations that it has repeatedly been looking to return to. Nonetheless, Malaysian reports have also quoted Fernandes as saying that Thai AirAsia X could launch services from Bangkok to Prague, Vienna and Sweden when it takes delivery of the A330-900.

Further growth across the Pacific is likely to be achieved through fifth-freedom operations via Japan and South Korea. That would reflect its present Honolulu services, which operate via Osaka to pick up Japanese traffic headed to Hawaii. 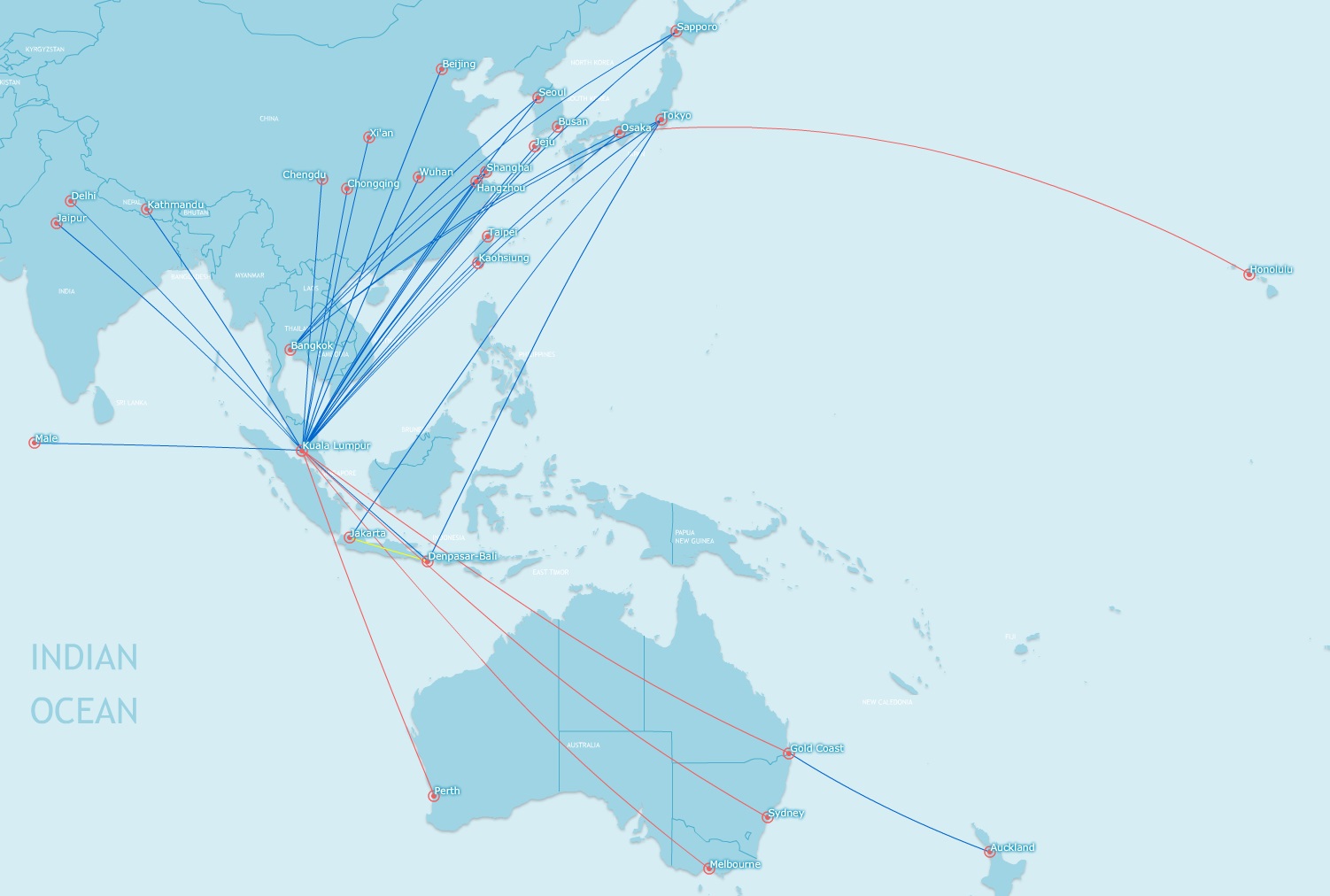 It was not the first time that the carrier has signalled an interest in flying to the mainland USA. In 2009 it became a sponsor of the Oakland Raiders football team, potentially indicating its interest in serving the San Francisco Bay area using Oakland airport. No services eventuated, however.

Meanwhile, for its Indonesia AirAsia X associate, the A330-900 is expected to be the main tool for its to build-up its dual hubs at Jakarta and Denpasar. China and Australia are expected to be the key focus countries for the affiliate, in addition to the Middle East, to meet Hajj and Umrah demand.

GROWTH, BUT AT WHAT COST?

With AirAsia X set to undergo a large financial undertaking, the potential high costs may worry some investors.

While Png acknowledges the A330-900's more favourable operating economics compared with its A330-300s, she questions if the carrier's "thin profit margins allow it to really fill up all these aircraft profitably".

For fiscal 2017, net profit for the group came in at MYR 99 million ($24.3 million), more than double 2016's figure. It ended the year with cash and cash equivalents of MYR 391 million, up from MYR 382 million at the start of the year. Load factor climbed two percentage points to 83%.

Shukor Yusof, founder of aviation advisory Endau Analytics, is also sceptical about AirAsia X's long-haul ambitions to Europe and the USA – particularly with its choice of aircraft.

"Come the late-2020s, the A330neo will be an aircraft with a decades-old design that has just newer engines. Factor in the high possibility of rising fuel prices and the economics to sustain intercontinental flights of between 10 and 12h look very poor.

"The 787, though around $30 million more expensive per aircraft, is a brand-new aircraft type that has proven itself with long-haul, low-cost carriers like Norwegian and Scoot."

Yusof suggests that AirAsia X would do better to focus on its strength of providing "high-density, low-cost flights on regional services". But if it does pursue European and US expansion, it should take a leaf out of the playbook of rival Scoot.

"Airlines like Scoot are choosing their points very carefully, such as Athens, which enables it to gather traffic from the rest of Europe,” says Shukor.