ANALYSIS: Why JetBlue chose the A220

Economics, network range and fleet plan flexibility. Those factors sealed the deal for JetBlue Airways in choosing the Airbus A220-300 after an "incredibly close" battle with the Embraer 195-E2, moving the airline towards becoming an all-Airbus operator.

The New York-based airline, however, went with the A220 after being convinced of its economics and fit for JetBlue's network strategy. An offer by Airbus to allow JetBlue to substitute certain A220-300 options with the smaller A220-100 sweetened the deal.

Embraer tells FlightGlobal its E2 proposal to JetBlue was "competitive" and a good fit for the airline. "We are, of course, disappointed with any loss. But the economics and capability of the E2 in operation will prove a winning combination in a large share of the transactions in the coming months, years and decades," says the Brazilian manufacturer.

Despite announcing the order for 60 A220-300s - with an additional 60 options - hours after Airbus officially rebranded the Bombardier CSeries the A220, JetBlue says the Airbus takeover was a secondary factor in its decision.

"That wasn't the key driver behind the decision," says Priest, even though he acknowledges that the A220 order gave the airline to opportunity to amend its Airbus orderbook. It has converted all 25 A320neos in its backlog to A321neos, while shifting the delivery dates of some of those aircraft. Two A321neos will now deliver in 2020 instead of 2021, and seven deliveries scheduled for delivery in 2021-22 have been pushed out to 2024.

"These changes will allow us to further upgauge our fleet in a margin-accretive way," says Priest. 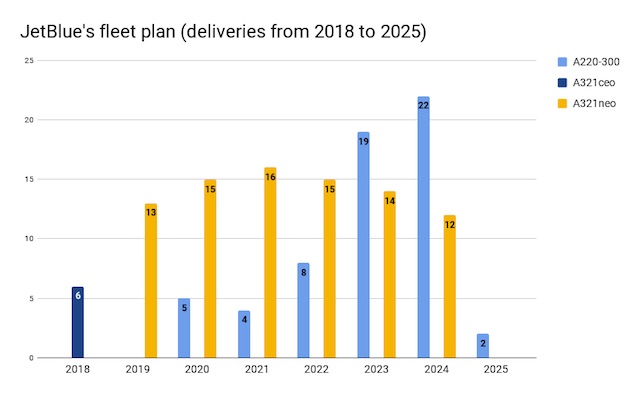 JetBlue estimates that the A220 will lower operating costs by 29% on a per seat basis, comprising a 40% reduction in fuel costs and 22% decline in non-fuel expenses, when compared with its existing Embraer E190 fleet. On a per aircraft basis, the A220 is expected to drive incremental profit of $4-$5 million.

When the airline's transition to the A220 is complete by 2025, systemwide unit cost would benefit by a decline of 5.3% and non-fuel unit cost by over 4.5%, says Priest. Earnings per share will also improve by about 65 cents on JetBlue's current share count.

From a network perspective, the A220 will allow the airline to cover a wider mission and optimise some of its E190 flying. About a quarter of JetBlue's E190 network today could be flown more optimally with larger aircraft, says executive vice-president for commercial and planning Marty St George, citing routes like Boston to Austin. 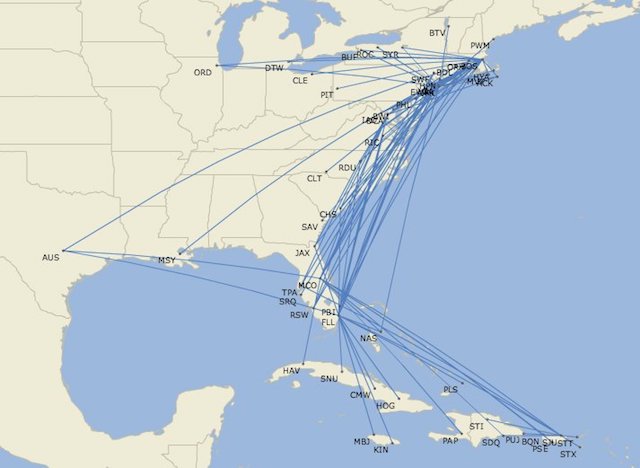 But since then, the airline has taken delivery of only 60 E190s, deciding in 2013 to optimise the fleet at that level. Another 24 E190 orders are sitting on JetBlue's orderbook following a deferral in 2013, with an additional 38 options, Flight Fleets Analyzer shows.

The future of the E190 fleet came into question when the airline announced a major fleet review in March 2017, targeted at cost concerns over the E190 fleet.

Priest says today that the E190 was purchased "at a different time for JetBlue" - when the carrier was just about three years old - with different missions in mind.

While the airline's E190 fleet is relatively young, it would require "significant upgrades into the next decade to be economically viable for us through to its full useful life," says Priest. JetBlue's 60 E190s have an average age of just under 10 years, Flight Fleets Analyzer shows.

The E190 accounts for about a 11% share of JetBlue's total capacity, but contributes 20% of the airline's operating expenses, it says. "We needed an efficient, smaller-gauge aircraft than the 162-seat A320 that would support high-frequency, short-mission and also longer-mission transcontinental flying," says Priest.

JetBlue will begin phasing out the first of its 30 owned E190s in 2020, while leases on the 30 remaining E190s will expire beginning in 2023. The airline estimates a one-time cost of $90-$110 million and a transition cost of $5-$15 million this year related to the fleet changes. It forecasts it will shoulder up to another $185 million in transition costs from 2019 through 2025.

The fleet change is expected to have a headwind of about 25 basis points on the airline's unit cost excluding fuel compound annual growth rate from 2017 to 2020.

JetBlue is in the process of evaluating any impairment costs from exiting the E190, and expects to share more details later this month during its second quarter earnings call. Priest says the carrier has made no decision on how it will dispose of its owned E190s.

JetBlue has not decided on the seat configuration of its A220s, but president Joanna Geraghty says the airline will have the opportunity to "redefine the interior" beyond what had been advertised by Bombardier and Airbus around the seating capacity of the aircraft.

Even though the airline did not factor its Mint premium product into its fleet analysis, Geraghty indicates JetBlue is not closed off to the idea of having Mint on a A220. "It doesn't mean we won't consider it," she adds.

All of JetBlue's A220 deliveries will come from a planned assembly line in Mobile, Alabama, where the airline is already taking delivery of A320 family aircraft. Priest expresses confidence in the planned facility's ability to deliver the aircraft on time. Airbus has committed to deliver A220s from Mobile in 2020 - right when JetBlue expects to take its first.

"We have a good amount of faith in Airbus," says Priest. "There is no reason to think there would be a delay."

While the airline has resolved the future of its smaller-gauge fleet, it continues to mull the need for a longer-range jet that will allow it to begin transatlantic flying to Europe. JetBlue will retain rolling options to switch its A321neo deliveries to the A321LR, as it continues to weigh the accretive revenue from any potential European service, says St George.