​ANALYSIS: Will Airbus keep the faith with the A380?

The news that Qantas does not have the appetite for the remaining eight A380s it has on order comes shortly after Airbus confirmed that it would halve output to one aircraft a month in 2018 and raises further doubts about the ability of Toulouse to revive the 500-seater's fortunes.

The Qantas revelation was made by chief executive Alan Joyce, who said that while "there's a network for 12 [A380s] that's very good and works very well", the airline "struggles with a network for the next eight".

This adds to the gloom around the A380's long-term prospects as Airbus has been suffering a prolonged order drought for its flagship product. Close to 200 aircraft have been delivered since the first nine years ago, and the backlog stands at just over 120 more. But Airbus has not secured a substantial order in almost two-and-a-half years, after lessor Amedeo signed for 20 in February 2014.

Emirates has been the A380's major sponsor, accounting for 142 of the very big jet's 319 orders, and operating a fleet of 81 aircraft. Commenting on the A380's sluggish sales just prior to July rate-cut announcement, Emirates Airline president Tim Clark voiced his frustration that other airline bosses could not understand the A380's appeal.

Joking that he's "doing more to sell the aircraft to my competitors than Airbus is", Clark said: "I think the size of the A380 – its capacity – scares most of the CEOs in the airline world today. That's why they probably regard me as being slightly bonkers – the fact that we have so many and we make them work. They just won't take that quantum jump."

Airbus boss Fabrice Bregier says he is "convinced this aircraft will find its way", pointing to expected rise in global traffic and increasingly busy hubs and airways as a driver for very large airliners: "This is not possible – with the congestion of traffic – that the A380 will not be seen as the aircraft of choice for many airlines."

Stating confidently that "the A380 is here to stay", Bregier has assured that the rate cut is temporary: "I think if we do that we'll be able to sustain the A380 at this low level for a few years before ramping up again," he says.

Flight Ascend Consultancy chief Rob Morris says Airbus is having to deal with the dynamics of the evolving market in the widebody sector: "The A380's economics are competitive with the current Boeing 777-300ER, but the 777-9 resets the equilibrium and the A380 as designed today is threatened," he says.

"The challenge for Airbus today is to maintain the aircraft in production for several more years while developing a next-generation A380 which can apply new engine, materials, systems and aerodynamic technologies to reset the economic equilibrium in its favour. If this is towards the middle of the next decade it will also likely see more increased demand for A380-sized aircraft. But maintaining profitability at one a month with a declining and increasingly concentrated backlog will be a not-insignificant challenge." 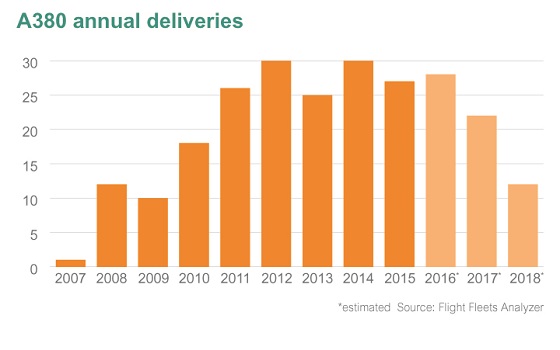 Clark recently described discussions with Airbus regarding a proposed re-engined "A380neo" as "lapsed", and hinted that he was worried that Airbus could suspend production of the current version: "We have a contract for 140 A380s that we will take, Neo or no Neo, because it is a good aeroplane at the moment. My main concern is that they would stop producing the airplane – I want my 140 delivered."

Since deliveries got into full swing in 2011, A380 annual shipments have been in the 25-30 aircraft range (see graph). Production started to break even last year, but the rate has never moved close to the planned four-per-month level originally envisaged for the programme.