Two of Asia’s most prominent and prestigious carriers Cathay Pacific and Singapore Airlines(SIA) have had a pretty dismal year so far, with profit figures plummeting in the face of growing competition amid a sluggish global economy.

While SIA stuck to its usual cautious tone in its outlook as it announced its first half results, Cathay took a more drastic move in October, scrapping its profit forecast for the usually seasonally stronger second half of the fiscal year and announcing a “critical review” of its business.

Cathay’s chief executive Ivan Chu has taken on an especially grim tone, acknowledging a “very tough” business environment and that the airline is not facing a short-term challenge, but rather a “structural problem” that will require a careful and sustained response.

The Hong Kong carrier’s operating profit for the first half of the year plunged 71.9% to HK$664 million ($85.6 million), while net profit slumped from almost HK$2 billion to HK$353 million.

SIA Group meanwhile recorded a 15.5% fall in its second quarter operating profit to S$109 million($76.1 million), while net profit fared even worse, plummeting 70% to S$65 million. For the first half of the year however, the airline still saw a 5.5% gain in its net profit, supported by growth in its various units.

While intrinsically different, Cathay and SIA still share many similarities. Both are city-state hub carriers with no real hinterland, and have traditionally relied heavily on their premium business, drawing high yields from the front-end of the cabin. Both have been hit by the rise of the Gulf carriers, and are now forced to contemplate the strong growth in direct services out of mainland China.

The two legacy airlines also have substantial fuel hedging systems in place, highlighting how conservative both are. These expensive hedges have dragged on their profits in the last quarters as fuel prices fell.

Now, both players are hit hard by overcapacity, partly driven by lower fuel prices, which has in turn led to a drop in yield and revenue.

Cathay and Dragonair saw an overall 10% fall in yield across all its passenger services, as ASKs rose 4%. SIA mainline meanwhile recorded a 3% decline in passenger yield.

The Hong Kong carrier notes a shift in the competitive landscape, particularly in Asia, where the growth in new capacity is, it cites, running at “historically unprecedented rates”. It adds that competitors have also “dramatically improved” products and services, adjusting their business models to compete efficiently against legacy operators such as itself.

HIT IN THE CORE

Chu says that while other airlines face the same challenging external environment as Cathay, they have done better with a leaner cost base. Cathay hence needs to raise its productivity – and do it fast.

In its critical review, the airline will look at how it can improve its revenue and costs, essentially reviewing the way the company is organised.

Cathay has been especially impacted by the Chinese carriers’ push in recent years to go long-haul. This has led to lower fares and yields, and also a loss of passengers who would transit in Hong Kong but now have the option to fly direct with Chinese carriers.

Airports and airlines in the Pearl River Delta region, another of its core business area, have also been expanding aggressively. Out of Shenzhen, for example, direct services to Sydney, Frankfurt, and Seattle were launched this year, with Auckland to start in December.

The two carriers, however, have a similar strategy of strengthening their premium positioning to stay above the competition.

Cathay says it will continue to provide “superior products and exceptional services” to win the hearts of passengers, investing in lounges and in-flight products, while also expanding its network.

SIA meanwhile continues to roll out premium economy on its various aircraft, and invest in new lounges, food and in-flight entertainment.

Both airlines are also undergoing fleet renewal and building on their Airbus A350 fleets, which will help develop some ultra-long-haul and niche routes. SIA is the launch customer for the A350-900ULR, which will fly non-stop to New York and Los Angeles in 2018.

Where they differ, however, is in their larger group strategy. While SIA has looked at how it needed to reposition the organisation in the face of rising LCC competition, eventually leading to its current multi-brand portfolio, Cathay has stayed largely stagnant in the past years.

The Hong Kong carrier has always maintained that it does not require a low-cost arm and that having competitive fares would suffice. In the November issue of its monthly magazine CX World, a staff asked if the group would reconsider its position and start a low-cost arm. Again, the answer was “no”.

It adds however, that the group might be in a position to reconsider starting an LCC, once the three runway system is in place at Hong Kong International airport. This however, will be at least a decade away, and could prove to be too little too late.

Cathay’s most recent strategic move is the rebranding of Dragonair into Cathay Dragon, targeted at aligning the regional carrier closer to its parent.

“Cathay Dragon has a strong foothold in the Chinese market, therefore it will be interesting to see how the group can stimulate transit demand, despite the overwhelming number of competitors in the region,” says Ascend’s Hui.

“The rebranding also allows the flexibility to make network and operational changes as they identify new route opportunities and modify under-performing routes.”

SIA meanwhile has taken an aggressive stance with a highly-evolved LCC model, in response to the ever increasing number of LCCs in the region, although at the expense of yields. It also set up Indian joint venture Vistara.

Scoot and Tigerair are pursuing a single brand and operating license starting next year, with the integration expected to drive better flight scheduling and connections as well as cost savings. The two low-cost carriers operate a combined network of 59 destinations across Asia-Pacific.

Hui believes SIA’s multi-brand strategy allows it to place the right brand in the right market, and for each carrier to focus on its market segment. 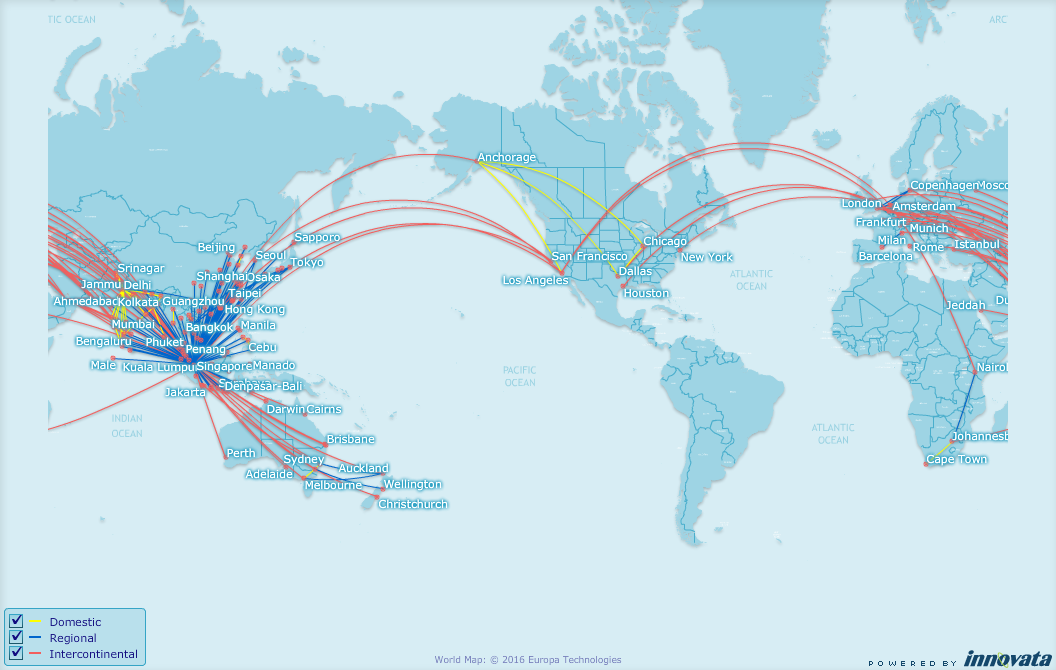 “We have taken bold steps in moving to quite different areas of growth, to look at new engines that could support the group. LCC is certainly one aspect where 10 years ago, you’d probably not expect us to go that way, and now it is very much part of the group’s portfolio,” says SIA chief executive Goh Choon Phong at an analyst briefing in November.

While SIA appears to have a clear sense of the task at hand, Cathay still needs to sort out its strategic focus.

“The focus will be on how we can win over the next five to 10 years and the things we need to do to survive and thrive for another 70 years in an environment that is experiencing significant change,” says Chu.