How shelving of 777-8 could prompt Boeing rethink

The decision by Boeing to shelve development of the 777-8 while it focuses on recovering the schedule of the baseline -9 aircraft is unlikely to have a significant impact on the overall programme. However, the move raises questions about the future of the smaller variant and could create opportunities for Boeing to refocus the 777X line-up.

Cirium fleets data shows that at 53 orders, the 777-8 represents just 15% of the total 777X orderbook. Only three customers (all of whom have all also ordered -9s) have signed for the smaller, ultra-long-haul variant – Emirates, Etihad and Qatar Airways. This compares with a total of eight for the -9 (plus one undisclosed customer where the variant has not been announced). 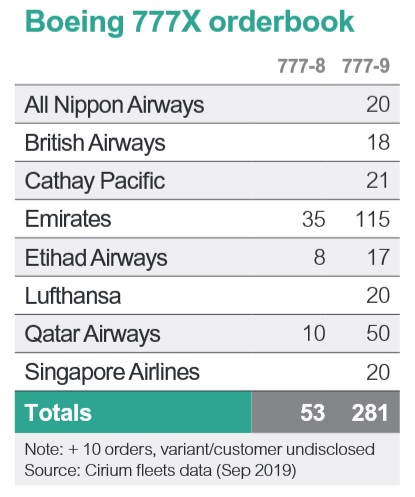 This year’s Cirium Fleet Forecast predicts 190 777-8s would be delivered through to 2038, beginning in 2022. This was when the -8 was originally due to debut – two years after the 777-9. But both these schedules have slipped.

The 777X family is a major derivative of the current twinjet, incorporating fuselage extensions and an enlarged composite wing along with new GE Aviation GE9X engines. The larger 777-9 baseline variant had been due to fly earlier this year and enter service in the first half of 2020. However, issues with the GE9X engines have forced Boeing to push back first flight and deliveries. It currently maintains it will still deliver the first aircraft by the end of next year.

With pressure building on the 777-9, Boeing confirmed in August its plan to shelve the smaller variant in the near-term, saying the move to “adjust” the schedule “[reduces] risk in our development programme, ensuring a more seamless transition to the 777-8”.

Could the 777-8’s shelving become permanent? It certainly can’t be ruled out, says Ascend by Cirium senior consultant Richard Evans.

“The 777-8 arose from the specific need for an aircraft that could carry full payload on routes from the Gulf hubs to the US West Coast. Whilst an important market, it is a relatively small niche,” says Evans. “If the airlines concerned see the payload offered by the 777-9 or Airbus A350-1000 as acceptable on these routes, it is certainly possible the 777-8 may be permanently cancelled.” 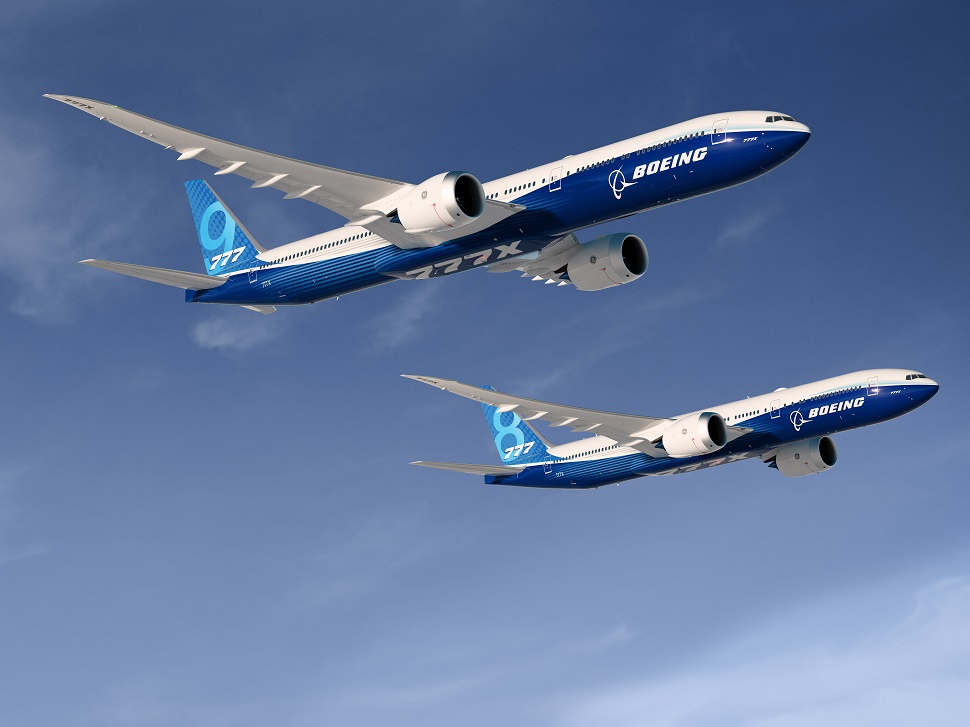 While the 777-8’s orderbook is not significant, the platform does offer several crucial future opportunities for Boeing. It is the airframe with which it intended to compete for the much-vaunted Qantas “Project Sunrise” 2023 requirement: an airliner capable of serving London direct from Australia’s east coast, with an economical payload. It is also seen as the path to a freighter variant of the 777X, much like the niche-selling 777-200LR was for today’s 777F.

While there is no direct competitor to the 777-8 in the Airbus product line, its short-term (or potentially longer) absence “certainly gives Airbus some opportunities to fill slots in 2021-2023”, says Evans.

The shelving of the -8 appears to present Airbus an open goal with respect to Qantas, given its 2023 delivery requirement – but Boeing is known to have pitched a “compelling option” to the Australian carrier intended to “help manage potential timing issues”. This is rumoured to involve an interim solution using the larger -9 airframe with reduced capacity to around 300 passengers and range extended by incorporating auxiliary fuel tanks, with the optimised -8 version following later. “I would also assume Boeing is offering a very attractive price,” says Evans.

The situation with the development of a 777X freighter derivative is less pressing, as it is not even currently at the launch stage. But Boeing is already talking about the new variant to replace the current 777F. Although the airframer is expected to end production of the current 777-300ER next year, 777F deliveries will continue alongside the 777X, meaning that two significantly different production standards will exist.

To date, Boeing has delivered 168 777Fs and has 59 on backlog extending out through 2023, according to Cirium fleets data.

Speaking at the Paris air show in June, Ihssane Mounir, Boeing’s vice president commercial sales and marketing, said development of a 777X freighter was “the natural progression of the family and then have one production line that has three [777X] models”.

“The production feathering is a very complex thing and you’ve got to do it not only from the efficiency of the factory, but also from the demand standpoint. We’re talking to our 777F customers in terms of when they would like to us to bring that composite-wing freighter [to the market],” he adds.

Ascend’s global head of consultancy, Rob Morris, says that according to its Fleet Forecast “a ‘777-8F’ is expected to arrive around the 2025 timeframe, and we see demand for around 290 through 2038”.

As Boeing evaluates the revival of the passenger 777-8, it may choose to focus its next efforts on on an even larger version of the 777X, the so-called “-10”. When asked about the prospect of another 777X variant by FlightGlobal at Paris, Mounir was guarded, saying: “if it makes sense, we’ll look at it”.

“In the long run, a bigger variant is more attractive than a niche ULR design with very high empty weight,” says Evans. “But it would need to demonstrate lower direct operating cost per seat than the largest 787 and A350 variants to be successful – otherwise airlines will stick with the low-risk option of smaller 300-350 seat types.”