The appeal of slots at Tokyo Haneda International airport shows no signs of abating, with Australian carriers now following their US counterparts in battling it out for the two daily slots that were recently awarded to the country.

Within weeks of Japan allocating two additional daily slots to Australia as one of nine countries to receive the coveted slots, Qantas lodged a hefty application seeking to use both slots to shift its daily Melbourne-Narita services to Haneda and bring its Sydney-Haneda service up to twice-daily.

“Qantas is the only Australian carrier to have the necessary brand, sales and distribution, network, marketing presence and regulatory approvals to support these additional services in a long-term and sustainable manner,” it said in its application to Australia’s International Air Services Commission (IASC).

But within hours of that being made public by the Commission, Virgin issued a statement saying that it would seek one of the slots. The full details of that followed on 24 September when its own application was made public, showing its proposal to use the slot to start a daily Brisbane-Haneda service using Airbus A330-200s.

“The Japan market represents an excellent strategic fit for Virgin Australia, as a destination with a strong growth outlook for both inbound and outbound travel, and which appeals to our leisure and corporate customers alike,” the airline states in its application.

A ruling on the slots is expected by the end of October, which will enable the successful carrier/s to apply for their slots in Japan ahead of the start of the northern summer scheduling season.

Being ready to start the flights come 29 March 2020 is shaping up as one of the major points of debate between Qantas and Virgin.

Qantas argues that as it already has a daily flight to Haneda, a strong distribution and sales network in Japan, and all necessary approvals in place, it should be awarded both slots because “there is no risk of capacity not being fully utilised in the required and would promote effective competition by Australian carriers on one of the country’s most mature but complex travel markets.”

Virgin counters this in its submission, arguing that it already has a local business license in place and has received advice that it would be well placed to begin the services by the start of the northern summer scheduling season.

“Any suggestion that Virgin Australia will not be in a position to commence flights on 29 March 2020 is unfounded,” the airline states.

The confidence shown by Virgin is interesting, particularly as it continues to work through a network, fleet and capacity review first announced in May, and has given away little detail on that. It appears that the opportunity in Haneda is one too strong to resist.

For it to mount daily services to Haneda, Virgin would likely have to reduce its A330-200 capacity on domestic routes or cut frequencies on its daily services from Melbourne and Sydney to Hong Kong, as it only has six of the widebody jets in its fleet.

Virgin also pointed to a new codeshare alliance with All Nippon Airways (ANA) and support from existing alliance partner Delta Air Lines as further evidence that it would be able to launch its services in time and bring competition to the market.

“Our partnership with ANA will play a strong role in boosting our distribution capability and assisting us to attract passengers from point of sale Japan during the start-up phase of our new flights, given ANA’s stellar reputation and strong sales presence in the Japanese market,” Virgin states.

Virgin’s proposal strongly emphasises that awarding it the slot would bring significant competition to the Australia-Japan market, which has been heavily weighed towards the Qantas Group and Oneworld partner Japan Airlines for some time.

Cirium schedules data shows that, including its Jetstar subsidiary, Qantas controls well over half the capacity on the market. That is only further aided by its relationship with JAL, which is the smallest of the four carriers that operate between the two countries. 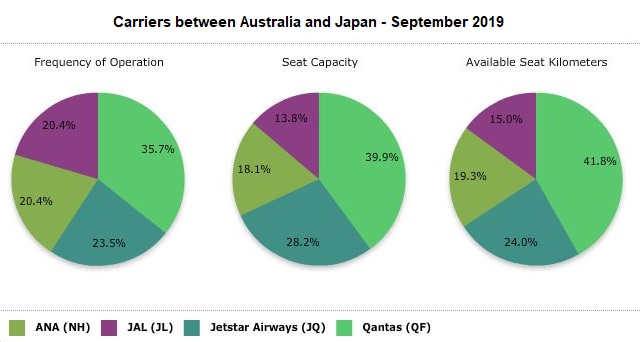 Qantas and ANA are the only carriers that operate flights between Australia and Haneda, with the Japanese carrier recently launching Narita-Perth flights. JAL flies to Melbourne and Sydney from Narita, while Jetstar operates primarily on leisure routes

The entry of Virgin to the Japanese market and creating more competition would make a compelling case for the IASC to split the allocation between the two carriers, and Qantas is likely to have an uphill battle on its hands to overcome that.

On its part, Qantas has tried to argue in its submission that moving the Melbourne flights to terminate at Haneda would bring “inter-gateway competition” to the market, even if it ends up as the sole Australian carrier to operate at the Japanese airport. By picking Brisbane as its departure point, Virgin holds a similar argument, while also showing that it can compete with Qantas’s daily Brisbane-Narita services.

Assuming that Qantas is granted only one slot, as appears likely, it is expected that will be used for a second daily Sydney-Haneda service rather than moving the Melbourne flight to the downtown airport as a way of maintaining its capacity on the route after it removes its Boeing 747-400s from service.

In June, Qantas chief Alan Joyce told reporters that although the Sydney-Haneda route would be a candidate for upgauging to the A380, it would be difficult as the airport only permits one A380 on the ground at a time. As its existing 747s stay on the ground before the evening departure, it would need that rule to change if it were to consider that upgrade.

In that context, the additional frequency would allow Qantas to maintain a similar level of capacity on the route to its 747s by using A330s and 787s, while also offering an attractive double-daily option to Sydney that could facilitate more connecting traffic.

That leaves Qantas unlikely to launch Melbourne-Haneda if it only gains one slot, and may raise doubts about its long-term intentions for the Melbourne-Narita route. The airline could threaten to drop Melbourne from its Japan network altogether if not awarded both Haneda slots, but to do so would undermine many of its arguments about the strength of the Japanese market.

The IASC has quite the job on its hands in deciding how to allocate the slots, but with competition being top of mind for the organisation, a split decision that would allow Virgin to enter the Japanese market for the first time seems most likely.