Ryanair’s combative chief executive Michael O’Leary is not a man prone to understatement. But when he was quoted as saying that cutting off his own hands was preferable to recognising trade unions, his point was clear. Keeping organised labour out of his aircraft has been a key feature of Ryanair’s low-cost business model that, over the course of three-and-a-half decades, has powered its ascent from regional player with one 15-seat turboprop to Europe’s largest airline by passenger numbers.

But by December 2017, this tough stance was becoming unsustainable. Autumn had brought major disruption and cancellations amid a pilot shortage, and Christmas threatened to be no better – forcing O’Leary’s hand. “Christmas flights are very important to our customers and we wish to remove any worry or concern that they may be disrupted by pilot industrial action,” he said. “If the best way to achieve this is to talk to our pilots through a recognised union process, then we are prepared to do so.” The airline’s share price fell on the news, but the threat of strikes receded. 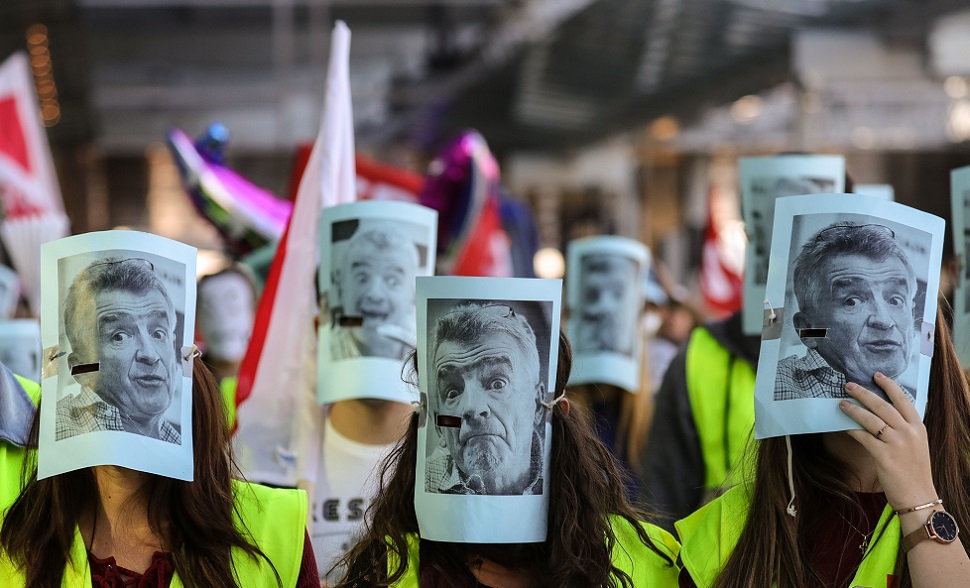 Greater accommodation of the unions seemed to follow. Starting autumn 2018, Ryanair signed a series of collective labour agreements with unions. An initial deal with Italian pilots was followed by CLAs with cabin crews in Germany, Italy and Belgium and then pilots in Portugal, Belgium and Ireland, something that served to “demonstrate the considerable progress we’re making in concluding union agreements with our people in our major EU markets”, Ryanair argued. More was to come, it promised: the aim was to seal CLAs in all of the airline’s main markets by the end of March 2019.

“O’Leary is nothing if not flexible and adaptable,” notes John Strickland, director of JLS Consulting. “There are many areas of business where he’s said he’s against something, then has changed his mind when he’s seen the wisdom of doing so.” In this case, faced with ever-assertive unions, a European pilot shortage, and reputational damage from a series of strikes and cancellations caused by lack of staff, recognising the unions and increasing pilots’ pay was a crucial step.

But Ryanair’s plan was multifaceted, Strickland points out. “The strategy also gave them the opportunity to damage their competitors,” he says. As European budget carriers competed for pilots’ services, their salaries were rising across the board – and Ryanair was in a better position to raise wages than most. Doing so not only stemmed the flow of pilots leaving, but also made life difficult for rivals such as Norwegian.

Clever though Ryanair’s strategy may have been, it has run into difficulties which have intensified over recent months. No fresh CLAs have been sealed since Portuguese pilots signed up in April, while increasingly fractious relations with staff in the UK, Spain, Ireland and elsewhere have caused strike-threat headlines to scroll across our screens once again. On 21 August, Ryanair learned the outcomes of two court actions aimed at blocking strikes – successful in Ireland, less so in the UK. A 48h strike by British pilots is now under way, although the airline has said it does not expect any disruption to flights.

“We see a change: we have a clear feeling that improving labour relations is shifting to a lower priority scale at Ryanair,” says Philip von Schoppenthau, secretary general of the European Cockpit Association (ECA), an alliance of pilot unions.

Not only have several negotiations stalled, but Peter Bellew – Ryanair’s operations chief and the chief negotiator with whom the unions had built up a level of trust – has departed to low-cost rival EasyJet. This move is itself now the subject of Irish legal action, brought by Ryanair against Bellew.

The ECA’s concern is that a clue to Ryanair’s new strategy may lie in its establishment of Polish-based subsidiary Ryanair Buzz, which perhaps hints that the carrier is planning to shift workers to subsidiaries in lower-cost and non-unionised locations. “This airline is being set up in a way that the pilots and cabin crew from established bases have been dismissed and asked to reapply as self-employed contractors in Warsaw Aviation,” says von Schoppenthau, who worries that Ryanair will use the winter season as an opportunity to make a bigger shift.

This, he warns, would draw a swift response. “What Ryanair needs to know and what their shareholders need to know is that if they go down that route they risk facing massive confrontation with their own staff” as national unions run out of patience with negotiations that do not bear fruit, he says.

Ryanair declined to be interviewed for this article.

Events at aircraft supplier Boeing have further pressured the situation. Excepting its Austrian subsidiary Lauda, Ryanair has an an all-737 fleet. Cirium fleets data shows that the airline has 420 737NGs in service. It has 135 Max jets on order and holds options a further 75. The grounding of the Max has thus thrown the airline’s planning into confusion. It has not received the number of aircraft it was expecting this year, and will not have as many as it had been due to have by the middle of next summer, either – the shortfall could be between 20 and 60 aircraft.

“They know that they have too many pilots, so they are having to deal with that challenge separately to the challenges about productivity,” says Strickland.. O’Leary recently commented that the airline “would not rule out redundancies and job losses, which will be inevitable if these Max delays are as presently envisaged or get worse”. Strickland notes that while this could be perceived as a negotiating position, “it’s a reality – they are not going to have those aircraft”.

Given that a flight typically requires 4-5 crew members, and given the price of employing the pilots, even a relatively small reduction in aircraft capacity could mean that significant additional costs have needlessly been incurred, an anathema to Ryanair in light of its business model.

Yet it is a sign of how poor Ryanair’s industrial relations have become that the ECA’s von Schoppenthau questions whether the airline’s citing of the Max crisis is a tactic: he points out that it could simply fly older aircraft for longer. Any suggestion that Ryanair could be pulling back its labour-relations efforts in the face of a pilot surplus and a potential economic slowdown is similarly dismissed: “Ryanair certainly have a massive growth plan. To bank on their being an oversupply of pilots would be really short-sighted – we see lots of airlines hiring pilots from other airlines.”

Not only this, but the ECA has further complaints about how Ryanair has negotiated its CLAs, complaining that the airline has often appeared to lack knowledge about local laws.

“The CLAs and recognition agreements with Ryanair are very generic, not very detailed,” says von Schoppenthau. “A typical CLA in the industry can easily have 100 pages, but the Spanish recognition agreement is six pages. All those substantial terms and conditions that pilots are really interested in their daily lives, not just pay, are still to be negotiated in many countries.”

He adds: “These CLAs and recognition agreements usually only apply to directly employed pilots, thereby excluding all those that Ryanair hires through broker agencies and those pilots who supposedly work as self-employed.”

This perhaps strikes at the heart of the issue. While the salaries on offer from Ryanair have risen significantly, much of the focus from unions is now on improving conditions. “Ryanair work their staff extremely hard, and that is where the unions are trying to chip away,” says Strickland.

The central theme of Ryanair’s business model, of course, is low unit costs. As pilot and crew costs rise, profitability may naturally be threatened, particularly if other costs over which the airline has less control, such as fuel, also rise, or if revenue is hit by softening airfares.

If its pilots are the most productive in Europe, completing more flying hours than rival airlines’, then Ryanair’s unit cost per flying hour can remain market-leading, even though salaries have risen – they have, after all, increased across the board. But the airline cannot afford to allow some of the other terms and conditions to loosen much, warns Strickland.

Limiting the conditions and perks of its staff and keeping a laser focus on costs have proven an extremely successful strategy for Ryanair. Unless the airline intends to change this feature of its business model – and there is no indication that it does – further industrial conflict with the unions seems certain.