As its latest blended winglet application enters service with Continental Airlines on the 757-200, Aviation Partners Boeing (APB) is eyeing further aircraft for the modification such as the 767, 777 and MD-80. 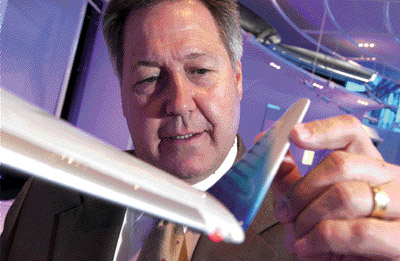 The US Federal Aviation Administration awarded APB a Supplemental Type Certificate (STC) for its 757 winglet in May and Continental put the aircraft back into service on its New York Newark-Stockholm service on 4 June.

The second 757 to be modified is also now in service with a third planned by the end of the month. All 11 757s that are having winglets fitted will be flying by year-end.

Preliminary results from Continental show it is achieving a 4.8% reduction in fuel burn on its Stockholm service, says APB chief executive Mike Marino.

The modification takes about 15-18 days to install. The winglet "system", which includes the winglet itself and everything needed to fit it to the aircraft except the actual price of the installation, costs $750,000.

The second airline customer for the 757 modification, Icelandair, will begin modifying its first of seven aircraft in October. Two undisclosed private operators have ordered winglets for their 757s.

The company is talking to several other carriers with transatlantic 757 operations like Continental, such as American, Northwest and United Airlines and European leisure operators First Choice Airways and Thomas Cook Airlines about possibly modifying their 757s with winglets, says Marino. 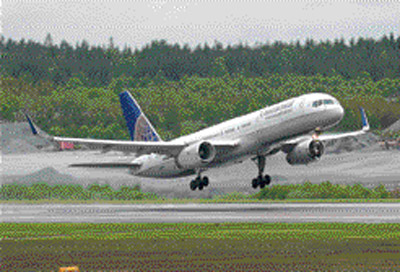 There are more than 650 757-200s in service worldwide that could be converted. "We should be able to capture 60% of that with the interest we're seeing," he adds.

Now that the 757 winglet modification is in service, APB expects market interest to boom. "Our experience has taught us that seeing is believing when it comes to certifying and marketing a technology as revolutionary as blended winglets," says vice-president of sales Patrick LaMoria.

With the introduction of the 757 to the programme and strong sales of its 737 winglets both for new and in-service aircraft, APB has ramped up the winglet production rate from 12 to 30 shipsets per month. At present, four of these are for the 757.

They are manufactured by Austria's Fischer Advanced Composite Components.

Earlier this month APB delivered its 700th winglet shipset. It has 438 shipsets on order with options for a further 1,100.

Meanwhile, by the end of the year more than half of the Next Generation 737s delivered to date will have had winglets installed, rising to 65% by the end of 2006, says Marino. While retrofits are proving popular, APB is increasingly supplying them as buyer furnished equipment for new-build aircraft. "Around 80% of new build aircraft have winglets," he says.

APB is in talks with Air Canada and others to launch the winglet programme for the 767-300ER. "It looks like we will probably launch in Q4 this year," says Marino.

The company is also discussing launch orders with Hawaiian Airlines, Japan Air Lines and UPS. From launch it takes from 18-22 months to achieve certification of a new winglet programme. The winglet for the 767 will be some 11ft (3.3m) tall.

The 767 winglet project will be the most significant investment made by APB to date, says Marino. It will announce a risk-share partner for this at the time of launch, just as it did with Fischer on the 757. The Austrian company, which has invested heavily itself in building up winglet production, is in a strong position to capture the 767 business.

As APB nears the 767 winglet launch, it is looking at wingtip treatments for the 777-200ER. The wingtip shape could either be a winglet or a "spiroid", which is a closed loop winglet. APB has a patent on this design.

"We hope to have a firm configuration by the fourth quarter and would like to be in a position to offer this modification to the market at that time," says Marino, with a launch customer signed up within a year.

If this goes to plan, APB could see the first 777 with winglets or spiroids entering service in mid-to-late 2007. If the spiroid design is chosen the company may have to develop a proof-of-concept flying demonstrator, which would most likely be on a 737 testbed.

The final airframe being studied for the winglet treatment is the MD-80 family. APB has been discussing this programme with several operators for a couple of years but a launch customer has yet to be signed up, says Marino.