The Australian Transport Safety Bureau has identified two more pieces of debris recovered off the African coast as most likely coming from the Boeing 777-200ER that was operating Malaysia Airlines flight MH370.

In an update report, the Bureau says that the two pieces were found independently at beaches in Mossel Bay, South Africa on 22 March, and Rodrigues Island in Mauritius on 30 March.

Both pieces were sent to Canberra for analysis, following a request from the Malaysian government, and were handled in accordance with ICAO practice, as per two other pieces that the ATSB previously identified.

‘Part 3’ was identified as a segment from an engine cowling due to the Rolls-Royce stenciling, and it conformed to applicable drawings from Boeing as being from a 777.

Although the stencil was not consistent with that originally used by the manufacturer, it did conform with the one used by Malaysia Airlines on its 777s. Nonetheless, the Bureau says that there were no identifiers tracing it specifically to the missing jet, which was registered 9M-MRO. 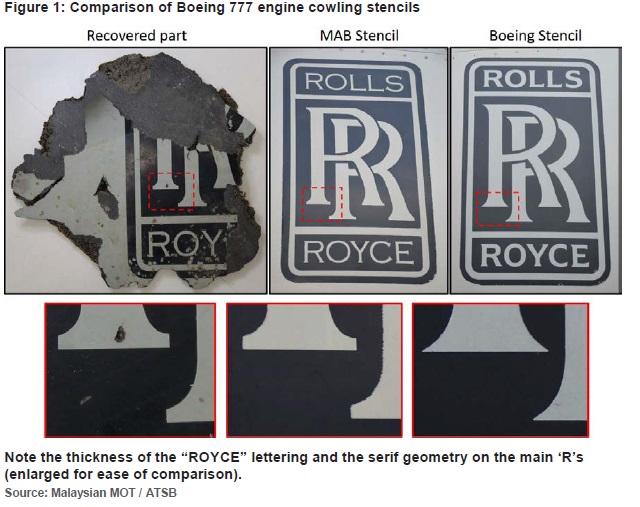 The other part, labelled ‘Part 4’ was identified as part of the R1 door assembly from a Malaysia Airlines 777. Specifically, a piano hinge attached to it was consistent with that used on a table hinge support, and the trim line was consistent with other aircraft.

“There were no identifiers on the panel segment that were unique to 9M-MRO, however the pattern, colour and texture of the laminate was only specified by MAB for use on Boeing 747 and 777 aircraft. There is no record of the laminate being used by any other Boeing 777 customer,” the ATSB says. 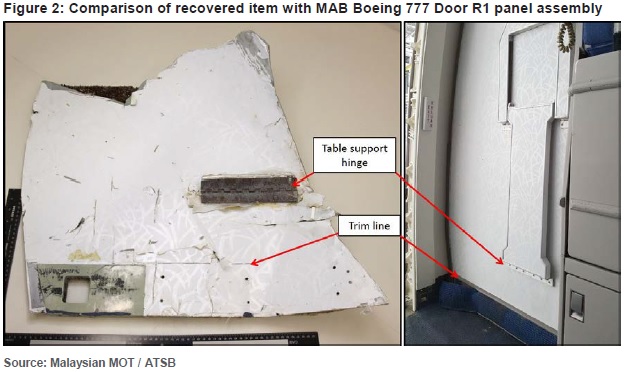 Although marine ecology analysis is continuing, the Bureau says that both parts are “almost certainly” from the missing 777. It also came to the same conclusion on the two other parts that were previously examined.

The underwater search for the 777 in the southern Indian Ocean continues, but has been hampered this week by rough seas and poor weather conditions which have forced the three vessels involved to depart the search area.

The Joint Agency Coordination Centre says that the search is still likely to conclude around the middle of the year, when around 120,000 square kilometers will have been covered.

“In the absence of credible new information that leads to the identification of a specific location of the aircraft, Governments have agreed that there will be no further expansion of the search area,” it adds.