The Australian government has announced its intention to acquire the Northrop Grumman MQ-4C Triton unmanned surveillance system, becoming the first foreign customer for the maritime variant of the Global Hawk.

Prime minister Tony Abbott made the announcement on 13 March at the Royal Australian Air Force's Edinburgh base north of Adelaide; the home base of its 18-strong Lockheed AP-3C Orion fleet.

“The government has committed to the acquisition of the highly-capable Triton unmanned air vehicle, subject to the successful completion of the US Navy development programme currently under way,” Abbott says. “These aircraft will patrol Australia’s vast ocean approaches, and work closely with other existing and future Australian Defence Force [ADF] assets to secure our ocean resources, including energy resources off northern Australia, and help to protect our borders.”

The Triton was selected under the ADF’s Project Air 7000 Phase 1B programme, which is the unmanned element of the RAAF’s two-phased Orion replacement effort. The government last month announced that between eight and 12 Boeing P-8A Poseidons would also be acquired under Phase 2B of the project from 2017. The combination of Poseidons and Tritons mirrors the joint manned and unmanned maritime force being acquired by the USN to replace its P-3C fleet. 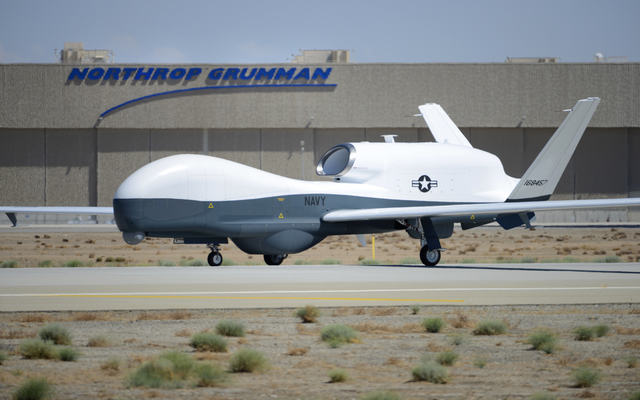 As with the USN concept of operations model, RAAF Tritons will perform the bulk of the high-altitude broad area surveillance mission over Australia’s vast northern maritime approaches and littoral regions, freeing up the manned P-8 for dedicated anti-submarine and anti-surface warfare, search and rescue response and electronic intelligence missions. The US service is already basing P-8s in the Asia Pacific region in Japan, and has plans to base Tritons at Guam and another, yet to be announced location in the Indian Ocean.

No introduction date or number of Triton airframes to be acquired has been announced yet, as the government is in the process of drafting a new Defence White Paper for release in early 2015. It is also waiting for the USN’s MQ-4C programme to move from development to operational evaluation, also next year. However, it is believed that between six and eight Tritons are required, and that these will likely be acquired under the Foreign Military Sales mechanism through the USN for service entry from 2020.

Abbott says the Triton’s ground support element will be located at RAAF Edinburgh, alongside the new P-8s. About A$140 million ($127 million) of new facilities and infrastructure will be required to support the unmanned type, he adds.

As with the RAAF's current AP-3C fleet, it is likely that Triton elements will be forward-deployed to bases in northern and north-western Australia for maritime surveillance tasks, with operations being conducted from a ground control segment at its Edinburgh base.