Following doubts over the timeline for the integration of MBDA-developed Brimstone 2 missiles on the Royal Air Force’s Eurofighter Typhoons, the UK Ministry of Defence has contracted BAE Systems to study the possibility of accelerating the process.

In February the National Audit Office released its Major Projects Report 2013, which claimed the integration of the air-to-surface Brimstone 2 on the Typhoon would not come to pass until 2021. This would result in a two year capability gap, following the retirement of the Panavia Tornado GR4 in 2019.

The £5 million ($8.5 million) contract for an initial study will facilitate an "effective route" to Brimstone 2 integration for the RAF by 2018, according to BAE and MBDA. The study will also explore the possibility of a common launcher that could be used with other RAF weapon systems, such as the latter's future Spear 3.

BAE is currently carrying out windtunnel tests at its facility in Warton, Lancashire, which will assess the aerodynamic effects of carrying the precision-guided weapon on the aircraft. 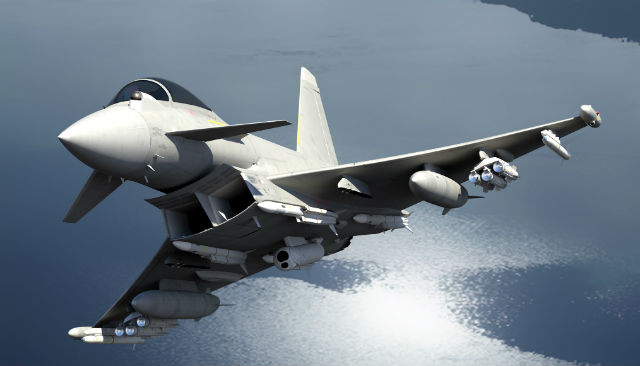 Brimstone 2 was originally due to enter service in October 2012 with the Tornado, although integration is now slated for completion in November 2015.

The delay in the introduction of Brimstone 2 has been attributed to a reliability problem with the Roxel rocket motor, which came to light during the latter stages of an environmental stress testing campaign in January 2012. Issues with the weapon’s new warhead also contributed to the slip.

"The Brimstone 2 will add to the swing-role capability of the Typhoon," BAE says in a statement released on 19 June. “Brimstone 2 is effective against the most challenging, high speed and manoeuvring targets over land and sea."

BAE adds: “The study contract will transition the dual-mode Brimstone capability that is combat-proven on Tornado GR4 to [the] Typhoon.”

One way to mitigate a capability gap between the retirement of the RAF's remaining Tornados and the introduction of Brimstone 2 on the Typhoon would be to integrate the dual-mode variant of Brimstone with the service's General Atomics Aeronautical Systems Reaper unmanned air vehicles.

In March, MBDA announced a series of tests into the integration of the weapon with the Reaper had concluded in January 2014, at the US Navy’s China Lake weapons range in California.

The campaign involved nine live firings against moving ground vehicles, all of which resulted in “direct hits”, according to MBDA.