Under a UK Ministry of Defence-sponsored feasibility study, BAE Systems has been contracted to research the possibility of adding a common weapon launcher on to the Eurofighter Typhoon.

The launcher would be able to carry multiple air-to-ground weapons on one Typhoon attachment point, including MBDA's dual-mode seeker-equipped Brimstone 2 missile and the Raytheon Paveway IV precision-guided bomb, and the manufacturers for both weapon types are also involved in the study.

The award is worth £1.7 million ($2.6 million) and the study phase started earlier in 2015 and is anticipated to conclude in June 2015, BAE says. It builds upon work performed under a previous MoD study contract that was awarded in 2014.

A decision on the potential development effort will follow the submission of a report to the MoD on the feasibility of the system. Following this and subject to the approval of the MoD, the study phase will be followed by a long lead time activity phase and a launcher development phase. Should this all be approved, it could become operational in 2019.

"Developing a common weapon launcher solution could significantly enhance the Typhoon's ability to deliver increased weapons persistence and effects," says Andy Eddleston, Typhoon product development and future capability director at BAE. “Each launcher could be capable of carrying up to three weapons, providing a great deal of flexibility and persistence for the operator." 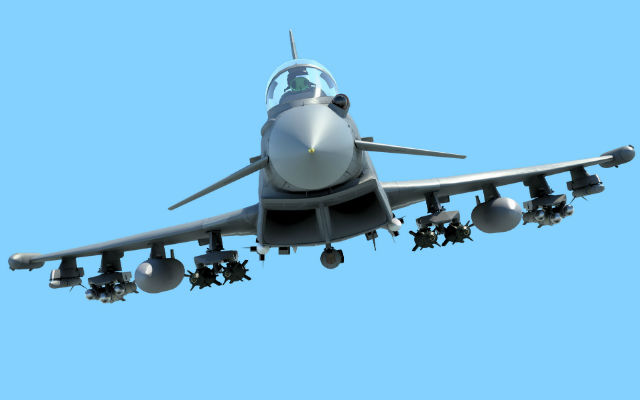 This follows a $224 million Phase 3 capability enhancement (P3E) package contract for the Typhoon, signed in February.

Approved by all four Eurofighter nations – Germany, Italy, Spain and the UK – the enhancements will include full integration of Brimstone for the UK fleet. This integration is worth £72 million to BAE, which completed a feasibility trial for the enhancement in 2014.

Full integration of the Brimstone 2 will enable the Typhoon to carry six of the weapons, which will be carried using a pair of three-round launchers.

The P3E standard is scheduled for delivery during 2017.