The MC-12W Liberty reconnaissance aircraft will be completely removed from the US Air Force’s inventory by 1 October, but Air Combat Command (ACC) says all of the aircraft will go to new owners and not the "boneyard".

The militarised turboprops have all but departed their home at Beale AFB in California: 11 are shifting to the US Army and 26 are destined for US Special Operations Command (SOCOM). That leaves four of the 41 aircraft unaccounted for, but a spokesman for ACC tells Flightglobal the plan for those last aircraft is still being finalised. 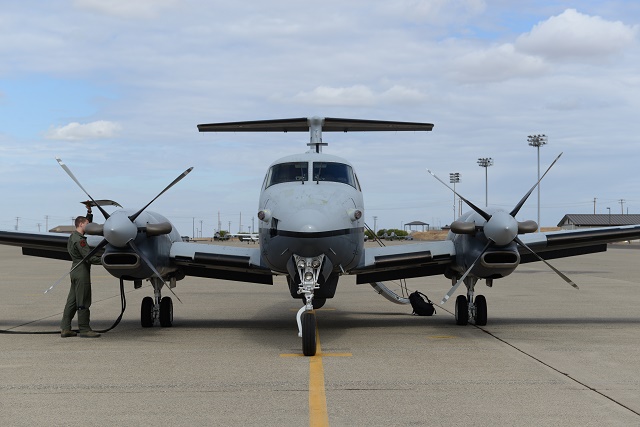 The MC-12 conducted its ceremonial final flight or “fini” at Beale AFB on 16 September, and the air force’s ownership of the programme expires at the turn of the fiscal year.

Once the remaining aircraft are accounted for, the air force will have completed its lengthy and politically difficult process of cutting the MC-12 from its budget books.

The twin-engined spy plane, based on the Beechcraft Super King Air 350, was rushed into combat in 2009 as a supplemental surveillance and signals intelligence asset in Afghanistan and Iraq, but the role has largely been handed over to the USAF's growing unmanned General Atomics Aeronautical Systems MQ-9 Reaper programme.

In November 2014, the air force reported that MC-12 crews had aided in the kill or capture of “more than 8,000 terrorists”, and uncovered 650 weapons caches.

The US Army and SOCOM will continue to employ the MC-12 in its counter-insurgency role, with various modifications.