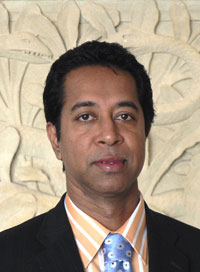 The future of Air is tightly bound up with the present government’s avowed objective to triple tourist arrivals in the paradise to two million in the next five years. The plan is to boost the economy following a decline in the nation’s fishing industry.

“This is putting pressure on the aviation industry but as the national carrier, Air is prepared to face the challenge. We have certainly set targets to meet the increased demand,” says chief executive Sanjay Bhuckory, who became the carrier’s chairman in 2005. He says that quality of tourism will still prevail over quantity, and while the hotel industry is building up, the island’s reputation for high standards will remain.

How Air fits into this scenario is not difficult to answer, says Sanjay. “We will maintain our course providing an excellent service and state-of-the-art comfort aboard our aircraft, and make a link between the hotel sector and the national airline.”

The government of Mauritius is in favour of liberalising market access and this may encourage airlines to come in that do not measure up to the level of service taken for granted by the traveller, says Sanjay. But, he emphasises: “We at Air are set to main our [high] standards and quality of product customers have come to expect from us. At the end of the day, customers will recognise the difference.”

A number of airlines from and are already flying into . Comair of South Africa is due start soon and Virgin Atlantic will add to its schedule next year. “Gulf carriers are also putting pressure on the government to allow more flights into the island,” says Sanjay.

Air Mauritius carries 1.2 million passengers annually, he notes, which about equals the population of the Republic of Mauritius, which includes the island of Mauritius and the smaller dependency of Rodrigues and two other islands. “We have first to consolidate and then to grow gradually to meet the government objectives,” he says. “This starts with an increase in capacity and frequencies in our traditional markets of , , and the . has shown the biggest increase in marketshare last year.” According to Sanjay, the airline is taking delivery of two more Airbus A340-300s before the end of this year, bringing its fleet to seven. It will acquire an A330-200 next year, plus one more to follow. The fleet also includes two A319s, two Boeing 767-200ERs, one 72 and two 42 turboprops. It also operates three Bell JetRanger helicopters for transfers between airport and hotel and for sightseeing tours.

“We will be adding 30% capacity with the A340s and more next year, which will ready us for our next phase, which is to capitalise on the world market,” says Bhuckory. A route will be opened next year, with other Chinese cities under consideration, and Air is also set to push into , following the recent bilateral agreement between the two countries. is also on the airline’s radar, says Sanjay, which will feature a codeshare with Kenya Airways to and the signing of a Memorandum of Understanding for a codeshare with South African Airways ().

With the part ownership of Kenya Airways, Air will be able to access other European markets through , while the partnership with will open up entry into North and through . Both Air Mauritius and operate the A340-300, which provides economies in training and maintenance, says Sanjay. “ is already a reality through interlining and superimposition of our network,” he says.

With so much negative publicity about safety standards in , Sanjay is proud that Air Mauritius has passed IATA’s IOSA safety audit with flying colours. On safety, the established airlines have to take the lead, he says, adding that IOSA should be seen as a “certificate of morality”.