Sangey Tenzing describes himself as an unusual sort of airline executive. The reason? He is desperate for competition - any competition.

"I do want it," says the managing director of Druk Air, the tiny national carrier of the reclusive Himalayan kingdom of Bhutan.

"Competition will be good for us," he adds.

The reasons are clear, he says. Druk is the only airline serving the mountainous country, which is so small that when something goes wrong the news spreads like wildfire. He also fears complacency within the airline's workforce without competitors. 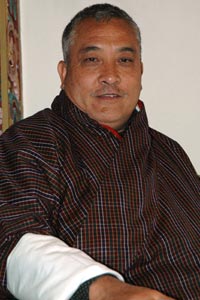 But there is no queue of airlines seeking to serve Bhutan, which effectively limits the number of foreigners who visit annually by requiring them to spend a minimum amount of US dollars per day. Sandwiched between the giants of China and India, Bhutan jealously guards its traditional ways of life and is wary of too much outside influence. Mobile phones were only introduced a little over four years ago - just four years after televisions were allowed into the country. Last month it had its first-ever elections.

"When something goes wrong everyone knows about it very quickly."

He adds: "Also when you have a problem, technical or whatever, competition can come to your aid."

Things go wrong less often these days, however, as the carrier has been modernising and in 2004 put into service two new Airbus A319s, which eliminated many of the reliability problems it long faced with its two British Aerospace BAe 146s, which made up its fleet for many years. Those aircraft were on the market for several years after the A319s were introduced and were finally sold late in 2007 to StarPeru.

Druk's Paro base has the only airport in Bhutan and it is a challenging one for operations, as it is at 7,335ft (2,240m) above sea level and is surrounded by high mountains. Between February and May the carrier is only able to operate in and out of Paro from early morning daylight hours until midday due to strong afternoon winds, as well as between 17:00 and 18:30. As a result it is forced to rely as much as possible on its fifth-freedom operations. It also regularly wet-leases out its aircraft to other airlines, such as Bangkok Airways of Thailand. 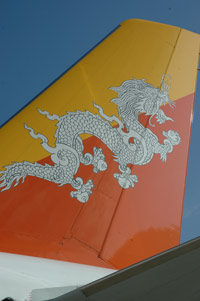 Druk is one of the smallest national carriers in the world, with a miniscule international route network and no domestic services. But with the new aircraft it has the capability to expand.

It has in the past few years added Dhaka in Bangladesh and Gaya in India to its network, which also extends to Delhi and Kolkata in India, Kathmandu in Nepal and Bangkok in Thailand.

Sangey Tenzing says the carrier was hoping to have added Mumbai as a destination by now but was only able to secure landing slots at night, which is not possible for Druk because of the operational restrictions out of its Paro base.

Druk was also hoping to serve Hong Kong from Kathmandu but the Nepalese government has restricted it from doing so. In addition, it was hoping to serve Singapore from Chennai in India but Sangey Tenzing says there is not enough traffic from Paro to Chennai to justify it.

He says it is hoped these locations can eventually be served, however, in addition to points in the Middle East such as Dubai.

In the meantime, the airline has been increasing services to existing destinations such as Bangkok as demand has increased steadily over the past three years.

Bhutan took in just over 21,000 foreign visitors last year, excluding Indian visitors and foreign workers who are not subject to visa restrictions and daily surcharges, and Sangey Tenzing says around 25% growth is expected this year.

He says Druk is now in discussions with Airbus to acquire a third A319 narrowbody, which he hopes can be delivered around 2010 or 2011.

"We are talking with Airbus," he says. "We have yet to get the [production] slot we would like but we are hopeful."

He says Airbus is offering delivery around 2014 but is trying to find an earlier delivery position for the airline.

With tourism picking up in Bhutan - more than doubling since 2004 when just 9,000 foreigners visited - and Druk's operational efficiency improving, the national carrier is now making money after suffering losses for many years.

Sangey Tenzing says the airline has now recorded profits for two consecutive years. It probably matters little, however. As the only air services provider to the kingdom, Druk Air is the definition of an essential service. 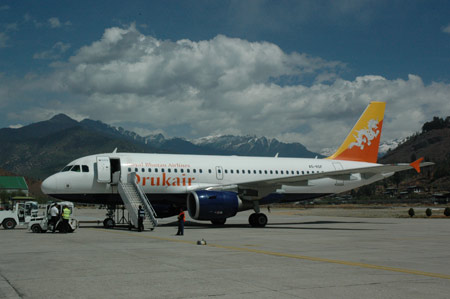