Regional Express has changed its maintenance procedures following a propeller failure incident on one of its Saab 340s that was caused by an earlier birdstrike.

The aircraft, registered VH-OLM, struck a flock of galahs during its landing roll at Moruya, the Australian Transport Safety Bureau (ATSB) states in its final report on the incident.

In accordance with Rex’s procedures, the crew carried out a test of the ice protection system before the engines were shut down, and no anomalies were detected. During the turnaround, the pilots conducted a visual inspection of the aircraft which showed signs of a bridstrike. However, there was no evidence that birds had been ingested into the engines, nor was any apparent physical damage.

“The examination included rotating the propellers so that the forward and aft blade surfaces could be inspected for cracking, buckling, chips, dents or deformation along each affected blade’s leading edge,” says the ATSB. “When no damage was identified, the captain contacted the operator for further technical advice and the crew were subsequently cleared to continue with the flight schedule.”

After completing the subsequent flight to Merimbula, the first officer noticed that the tip of one of the left-hand propeller blades had detached, and the aircraft was subsequently grounded. 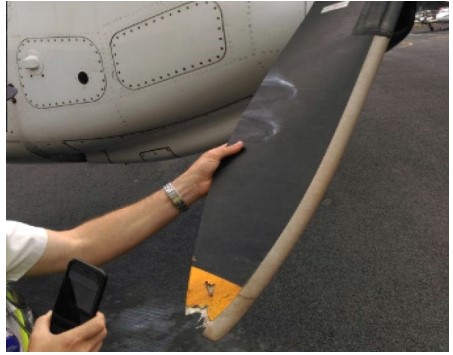 There were no injuries reported to passengers and crew, and no other damage to the aircraft was found.

The ATSB says that that impact from “multiple galahs almost certainly reduced the structural integrity of a propeller blade, resulting in the separation of its tip during the subsequent flight”.

“Regardless of the nature of the flight crew’s inspection, both [the Civil Aviation Safety Authority] and the propeller manufacturer considered the inspection to be a maintenance task, and required it to be carried out by qualified maintenance personnel,” says the Bureau.

Subsequently, Rex changed its procedures to require an engineering inspection before an aircraft departs if there are signs that wildlife may have struck the propellers.