Piasecki Aircraft has taken delivery of a Sikorsky SH-60F Seahawk prototype for modification into a compound helicopter using the company's vectored thrust ducted propeller (VTDP). The development has been funded by the US Navy, but the demonstration programme has been transferred to the US Army, which is interested in increasing the speed and range of its UH-60 Black Hawks, says president Fred Piasecki.

Modifications will include removal of the YSH-60F's tailrotor, installation of the 2.4m (8ft) -diameter VTDP and mounting of a 7.3m-span wing. The tailrotor drive system will be modified to triple the power available to drive the VTDP's five-blade variable-pitch ducted propeller, Piasecki says. Flight testing is planned for next year, funding permitting.

With the VTDP providing thrust for forward flight and the wing offloading the main rotor, the compound helicopter will be able to reach higher speeds with lower rotor loads and vibration. In forward flight, the VTDP's cruciform elevator and rudder will provide pitch and yaw control, with roll control via wing flaperons.

In vertical flight, the flaperons will be lowered like flaps to reduce rotor download on the wing and anti-torque control will be provided by the VTDP using a set of nested spherical shells, or sectors, that will deploy to vector propeller thrust. On the YSH-60F, the wing and VTDP controls will be mechanically integrated with the helicopter's existing flight controls, but the Essington, Pennsylvania-based company has submitted a proposal for a fly-by-wire system, says Piasecki.

Compounding is expected to increase the speed of an H-60-series helicopter to 215-225kt (395-415km/h), but testing will be limited to the YSH-60F's existing flight envelope, says Piasecki. The helicopter will be instrumented to measure rotor loads and vibration, with reductions of up to 50% expected. In service, these reductions would translate into increased safety and lower maintenance, the company says. 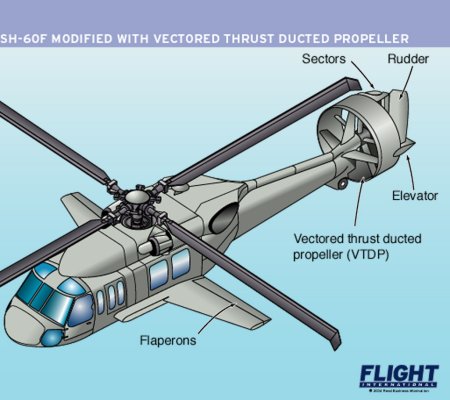