Boeing engineer and aircraft designer Joe Sutter, who achieved aviation icon status as the “Father of the 747”, died on 30 August. He was 95.

“Joe lived an amazing life and was an inspiration – not just to those of us at Boeing, but to the entire aerospace industry,” Boeing Commercial Airplanes president and chief executive Ray Conner wrote to employees.

Sutter, a native of Seattle, began his career with a summer job at Boeing in 1940 while studying for an aeronautical engineering degree at the University of Washington. 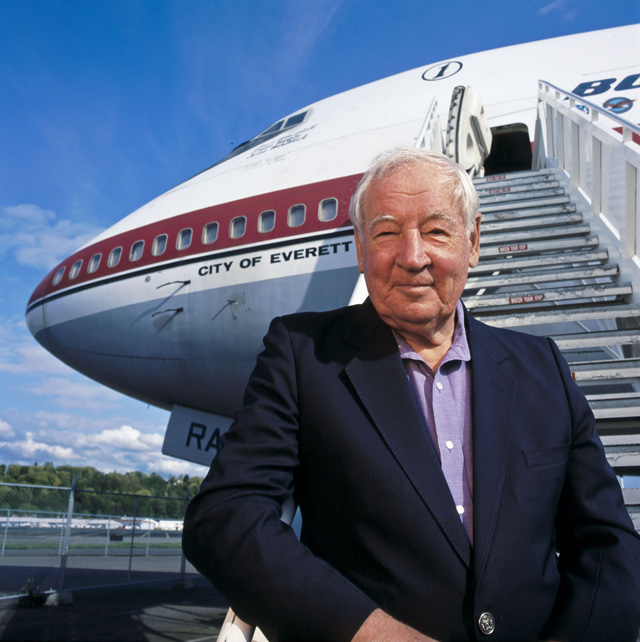 In the library of Boeing history books, Sutter’s role in the company is widespread, from delivering the technical data that drove the decision to use a T-tail on the 727 to recommending under-wing podded engines on the original 737-100.

“One day I was sitting in my office and thinking, there’s got to be a better way of designing this mousetrap,” Sutter told the author Robert Serling. “With these little airplanes, I felt if you put the nacelle barrels right underneath the wings, and worked the air inlet and exhaust exit properly, you wouldn’t have this adverse drag impact.”

His preference for mounting engines underneath the wings would have a lasting impact on the industry beyond Boeing. Meeting Ilyushin designers at the 1971 Paris air show, Sutter was shown an early design of the Il-86, Russia’s answer to the 747-100. Surprisingly, it was to have aft-mounted engines. Sutter explained to the Ilyushin designers why he had selected wing-mounted engines for the 747, using a tablecloth to scribble drawings and equations. The Russians folded up the tablecloth and took it with them. Never again was the Il-86 seen with fuselage-mounted engines.

Sutter’s legacy, however, is forever linked to the 747, the Boeing aircraft credited with opening international air travel to the masses. The aircraft entered service in April 1970 – only 51 months after a Pan Am order launched the programme. Although a sprint by modern standards, the 747 development programme was actually behind schedule, as Sutter’s design team – later immortalised as the ‘Incredibles’ – grappled with the challenges of designing and building the world’s largest jetliner.

“It remains a staggering achievement and a testament to Joe’s ‘incredible’ determination,” Conner writes.

Sutter continued to champion the 747 programme well into the last decade. After several larger versions were dropped, Boeing finally agreed to launch another stretch of the venerable widebody in 2006, thanks largely to inheriting a pair of GE Aviation engines leveraged from the 787 programme. For several more years, Sutter continued to believe an even larger stretch of the 747 with about 550 seats was still possible. But the 747-8 has sold poorly with airlines, while the freighter variant struggles to gain traction in a stagnant air cargo market.

In late July, Boeing acknowledged for the first time in financial filings that the company may have to shut down production of the 747-8.

At 95, Sutter was among the last survivors of his generation of Boeing engineers. In his later years, the loss of so many friends appeared to trouble him more than any decisions about Boeing’s commercial products.

“My only regret,” Sutter told FlightGlobal in 2009, “is that I’m damn near the last one left. It’s hard for me to find a golf partner.”