The first Boeing airliner to be designed totally using three-dimensional computer graphics, the 300-370-seat Boeing 777 remains the largest twin-engined airliner in the world, spanning the capacity gap between the Boeing 767 and 747.

With an all-new fuselage section, new wings and an innovative approach to the design of the cabin, providing more overhead baggage space, the Boeing 777 entered service with United Airlines in 1995. 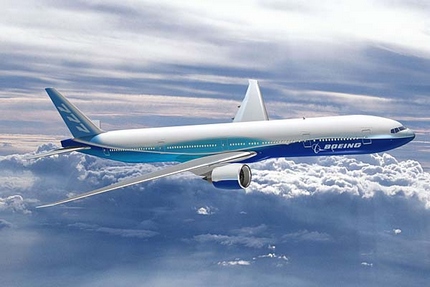 Originally conceived as a re-winged and stretched version of the Boeing 767, the Boeing 777 became an all-new design featuring Boeing’s first use of fly-by-wire flight control technology along with a new flight deck based around six large-format liquid crystal displays.

All three engine manufacturers power the Boeing 777 with the most powerful turbofans ever to enter service, the General Electric GE90-115B on the Boeing 777-300ER producing an unprecedented 115,000lb of take-off thrust.

In 1995 the Boeing 777 won 154 orders - a record number for a single year. The aircraft was the first aircraft to be certified by the US Federal Aviation Administration to fly extended-range twin-engined operations (ETOPS) at entry into service, with approval for the Pratt & Whitney PW4074-powered Boeing 777 to fly 180-minute ETOPS services.

Launched in October 1990 with a United Airlines order for 34 aircraft, the Boeing 777 made its maiden flight in June 1994. The basic Boeing 777-200 was offered in “A” market and increased gross weight “B” market versions, this version becoming the Boeing 777-200ER.

The 777 was the first Boeing aircraft in which potential customer airlines were involved in the design, one result of which was an agreement that many previously optional items, such as the global positioning system, would be included as standard. All fuel is accommodated within the wing, which on the Boeing 777-200LR and –300ER feature extended wingtips to improve take-off length and improve climb performance.

Another innovation, introduced on the Boeing 777-300, was a camera system allowing the pilot to manoeuvre the 73.9m aircraft more easily around airport taxiways.

43 airlines worldwide have placed 849 firm orders for all versions of the Boeing 777. Emirates became the largest Boeing 777 customer in the world in November 2005 with its order for a further 42 aircraft, bringing its total 777 fleet to 93.
Read more about the history of Boeing 777 in the Flight Archive

Boeing 777 on the Flight Global Forums -

The latest discussions on Flightglobal's Fourms:

Boeing 777 Aircraft Articles from around the web

More Boeing 777 News from around the web