The first Boeing 787-9 landed at Boeing Field in Seattle after a 5h 15min maiden flight today. 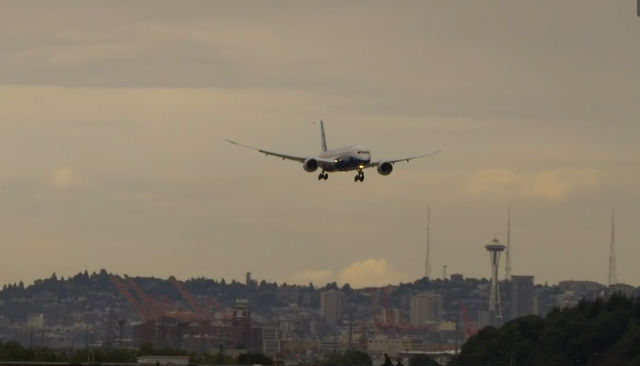 Flight number BOE001 landed on runway 13R at 16:18 local time after spending most of its flight above eastern Washington state. It took off from Paine Field in Everett, Washington, at 11:03 local time. 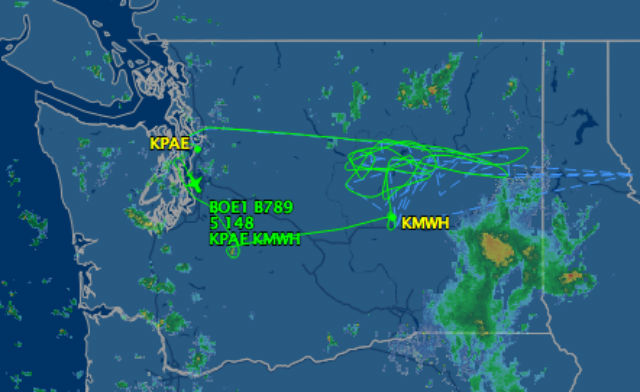 Boeing says that captains Mike Bryan and Randy Neville were “incrementally expanding the envelope of the airplane” during the flight. This included flying at varying altitudes, as well as speeding up and slowing down.

Boeing froze the design of the 787-9 three years after first coming to grips with the supply chain breakdowns and design problems that plagued development of the smaller 787-8.

The interim period allowed Boeing to address many of the issues that had made the 787-8 development programme so difficult and costly. For instance, Alenia’s glitch-prone system for building the horizontal stabiliser on the 787-8 was redesigned and augmented with an internal Boeing production system in Utah.

Boeing also installed a suite of weight savings changes that trimmed 4,540kg (10,000lb) from the airframe, explains Mark Jenks, Boeing’s vice-president of 787 development, on a live webcast of the first flight event in Seattle.

Moreover, the 787-9 was among the first Boeing aircraft that was developed using a re-tooled internal management system, says Scott Fancher, Boeing’s vice-president and general manager of airplane development.

The design and production system changes made the 787-9 a leaner vehicle. To gain 40 more seats in standard three-class configuration and increasing range by 3.95% to 15,800km (8,500nm), Boeing increased the maximum take-off weight only 10% to 251,000kg (553,000lb). The first assembled aircraft came in slightly below the target weight, Fancher says.

The 787-9 is not scheduled to enter service with Air New Zealand until the third quarter of 2014, offering Boeing another nine months to resolve the teething issues that have bedevilled the 787-8’s entry into service.

The 787-9 “is really about performance” Fancher says. “The 787-9 is just an amazingly efficient machine. This is not a simple stretch.”