Cost control on the Boeing 787 programme showed some improvement on a unit basis in the first quarter, but the company remains far from break-even.

If deferred production, unamortised tooling and other costs are factored in, Boeing lost an average of $30 million on each of the 30 787s delivered in the first quarter.

That represented an 11% decline from a $34 million unit loss on each of the 35 787s delivered in the fourth quarter of last year.

Boeing still plans to reach break-even on a unit basis by the end of this year on the 787 programme.

“The programme continues to make improvements on unit costs,” Greg Smith, Boeing’s executive vice-president and chief financial officer, said in a first quarter earnings call with analysts on 22 April. “We’ve still got a long way to go, but we’re making a lot of progess.” 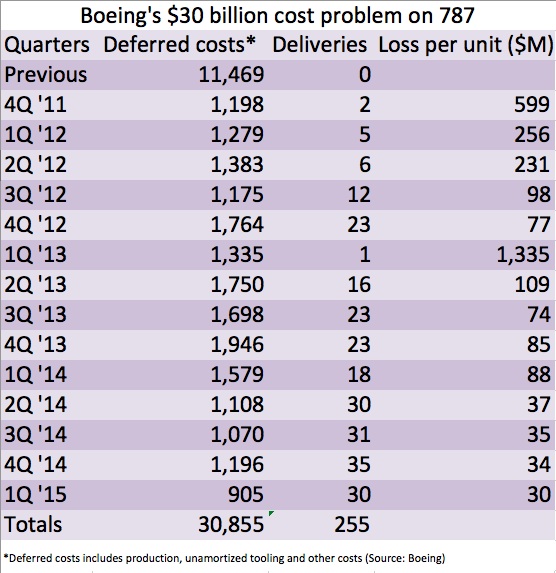 The unit accounting losses on each 787 do not show up directly on Boeing’s quarterly balance sheet.

Instead, Boeing’s programme accounting method defines a block 1,300 aircraft expected to be delivered and builds in a predetermined cost and operating margin for each aircraft delivered within the block.

Actual losses on each aircraft delivered so far are added to the programme’s deferred production cost. Boeing also has a separate line item for unamortised tooling and other costs.

The combined deferred production and amortised tooling costs rose by $905 million in the first quarter to exceed $30 billion.

Although overall costs are still rising, the first quarter represented the first three-month period that the figure was held under $1 billion since Boeing started delivery 787s in the fourth quarter of 2011.

The unit cost improvement in the first quarter could have been greater if not for supply chain problems. Zodiac Aerospace has fallen behind on deliveries of premium cabin seating. GE Aviation also discovered a quality problem with a component that delayed shipments of 29 GEnx engines. Both issues are expected to be resolved in the second quarter.

“We do have a high confidence in the plan to resolve” the Zodiac seat issues, says Boeing chief executive and chairman James McNerney. “”It’s not going to disrupt our production plans.”