Boeing and Saab’s bid for the US Air Force trainer competition took flight from St. Louis, Missouri, on 20 December, demonstrating the clean-sheet design’s performance for the first time.

During a 55min flight, the single-engined jet climbed close to 11,000ft and reached speeds of up to 230kt (430km/h), Steve Schmidt, lead T-X test pilot, told reporters. Boeing will persevere through the chilly Missouri winter to gather flight performance data for the T-X competition, which the company must deliver by 30 June 2017.

“I think our biggest challenge is we’re in St. Louis in the wintertime,” Schmidt says. “Other than that, we can get the data we need in the time allotted to submit a proposal. We’ve had time to plan for it and can execute it.”

For both Boeing and Saab, the quick turnaround from design to flight for a production jet is rare, according to Boeing T-X programme manager Ted Torgerson. Typically, a company could spend six to eight years developing a jet. With T-X, the team cut that timeline in half.

“We made a commitment to design, develop and fly by the end of 2016 and today we delivered on that promise,” Torgerson says. “At this time last year, we were in critical design review [CDR]. So we went from CDR to first flight in 12 months.” 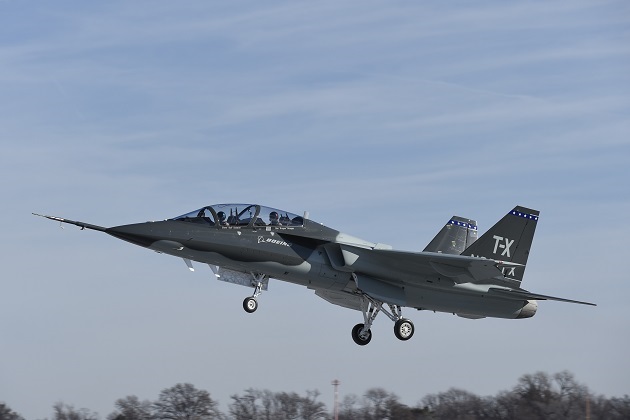 Boeing and Saab first revealed its T-X contender to much fanfare in September. The team designed two jets, the second of which is completing ground testing and should fly by early 2017, according to Boeing. The trainer system also includes ground-based trainers and simulation.

The twin, canted tail aircraft is powered by a single 17,700lb-thrust GE Aviation F404-402 with afterburner. The aft cockpit of the two-seater is stepped up to allow the second pilot improved visibility, Torgerson says. The stadium seating is an improved feature from the legacy Northrop T-38, he says.

“When we interviewed a lot of instructors flying the current T-38 they didn’t like the current visibility to look at the aimpoint on landing,” he says. “Now you can see the aim point over the pilot’s head.”

The team is gunning for the coveted air force contract, which would replaced the service’s fleet of more than 400 T-38s. T-X is slated to reach initial operational capability by 2024 and Boeing estimates the air force will release its final request for proposal by 30 December.