A Boeing 787 today completed the first flight test to study the in-flight performance of the lithium-ion batteries that have kept the fleet grounded for nearly one month.

The test aircraft ZA005 landed after a nearly 2h21min flight that spanned nearly 1,480km (794nm) and ranged from the southwest corner of Washington state to over the Puget Sound.

Boeing's original flight plan proposed only a 2h flight, but it was extended late in the sortie. 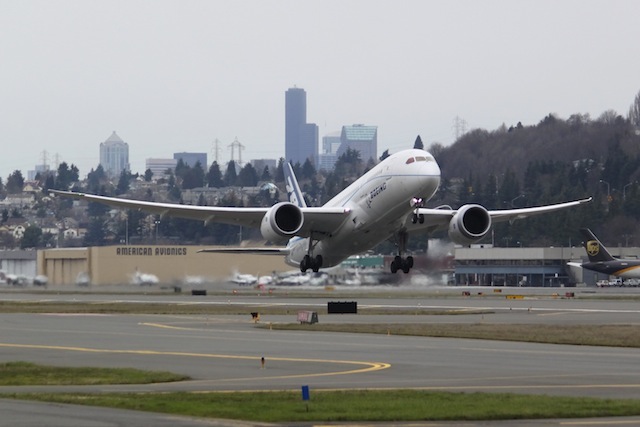 The test examined the performance of the same lithium-ion batteries that experienced short-circuit events and a thermal runaway on two 787s a month ago. No changes to the batteries were made prior to the test, Boeing says.

The US Federal Aviation Administration cleared Boeing to return ZA005 to flight test status on 7 February. The agency requires the test crew to perform a pre-flight inspection of the batteries, monitor their status during flight and land immediately if any battery-related alerts appear on the flight management system.

Boeing says the flight tests will provide data to the ongoing investigations searching for the root cause of the battery failures.

The FAA and Boeing are both reviewing the battery failures and the certification process for the overall electrical system.

A separate review is also underway by the US National Transportation Safety Board (NTSB), which has jurisdiction over the battery fire incident on board a parked Japan Airlines 787 in Boston on 7 January. The NTSB also is reviewing the documentation of the battery certification process.

Although the NTSB has discovered that multiple short circuits occurred in the sixth cell of the eight-cell, 32V battery, the cause of the short circuit is still a mystery. The NTSB is looking for a source at possible faults in the electrical system, manufacturing defects or a battery design problem.

The Japan Transport Safety Board, meanwhile, is investigating the root cause of the All Nippon Airways 787 battery failure over Japan on 16 January.