Neither deal is secure, but Boeing Defense, Space and Security boss Chris Chadwick is encouraged by new defence policy legislation in Congress that would fund 12 more Super Hornet buys, and reports that Kuwait is nearing a deal to become the third nation after the US and Australia to procure E- and F-model F/A-18s.

Speaking to reporters at a company-funded media tour in St Louis, Chadwick said he could not comment specifically on any possible deal with Kuwait, which was also considering the Eurofighter Typhoon, but the two orders would combine to keep the production humming for another year beyond the anticipated 2017 end date.
“In my mind, I can paint a picture that maintains strong F-18 and strong F-15 production through to the end of the decade,” he says.

The company says it needs to produce at least two aircraft per month to keep production going, and more orders might could spur countries to pick Super Hornet, which is currently a less-costly rival to Lockheed Martin’s more advanced F-35 Joint Strike Fighter.

“It’s very good news for us,” Chadwick says of the potential Navy order, which still needs to clear several legislative hurdles. “We’ll see how it plays out. We have active discussions ongoing with all of our existing customers of the Classic Hornets and wherever it makes sense for us to compete with F-35.”

Canada and Denmark are both reconsidering their selection of the F-35, and the Super Hornet is positioned as the top American-made alternative. Some in industry think the Joint Strike Fighter could still be a done deal for both countries, but Chadwick rejects that notion, saying Boeing only competes the Super Hornet where the competition is “truly open.”

“I think in both those cases, as we move forward very steadily, that those customers, those governments, truly are taking a second look at what their needs are and what capability the F/A-18s could provide,” he says.

The St Louis plant was thrown a lifeline last year when Congress funded additional EA-18G Growler purchases. The Navy did not include more Super Hornets in its 2016 spending plan, but requested 12 buys in an “unfunded priorities list” sent to lawmakers earlier this year. 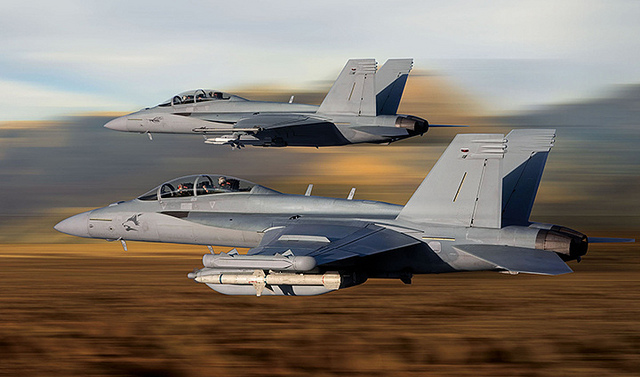