Boeing has become the second competitor to file a protest against the US Air Force’s acquisition strategy for the Compass Call recapitalisation programme, alleging L-3 Communications’ lead on the cross-deck effort will hand the award to Gulfstream’s G550.

The USAF’s Compass Call cross-deck effort will transfer existing technology from the legacy EC-130H onto a new aircraft. Earlier this year, the USAF announced the systems integrator L-3 would select and incorporate existing mission systems onto the platform.

Boeing filed the protest with the US Government Accountability Office on 19 May and the agency will make a decision 28 August.

“The Air Force's approach is inconsistent with Congress's direction in the 2017 National Defense Authorization Act and seems to ignore inherent and obvious conflicts of interest,” a Boeing spokeswoman said in a 25 May statement. “We believe that the U.S. Air Force and taxpayer would be best served by a fair and open competition, and that the Air Force can still meet its stated timeline of replacing the aging fleet of EC-130Hs within 10 years.” 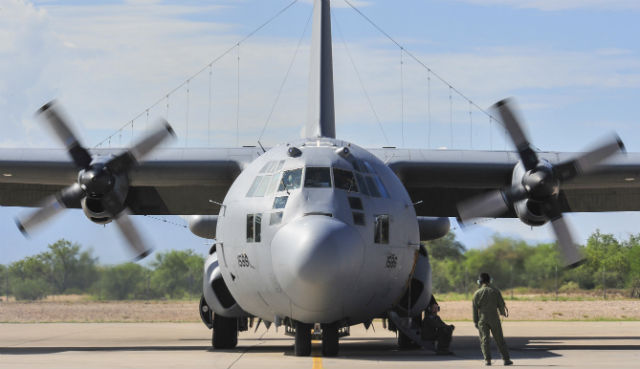 The “conflict of interest” protest alludes to L-3’s previous partnerships with Gulfstream, including its recent teaming in the JSTARS recapitalisation competition. The Compass Call cross-deck is the first of a series of intelligence gathering and command and control platform recapitalisation efforts within the USAF, beginning with the E-8C JSTARS. The EC-130H serves as a communications eavesdropper for the service.

But air force leadership remains committed to its acquisition approach. During a 25 May hearing on Capitol Hill, the service’s military deputy for the assistant secretary of the air force for acquisition told members of Congress that using L-3 to choose the aircraft represented the quickest way to replace the aircraft. The air force also chose L-3 because the company has modernized the EC-130H over the last 15 years and is familiar with its classified electronic warfare equipment, Lt Gen Arnold Bunch says.

“They have all the tooling, all the existing knowledge and modeling to do that work and...the preponderance of this is a non-developmental effort,” he says.

Although L-3 will choose the aircraft, Bunch emphasizes the air force will not play a bystander role in the competition. The service will review the aircraft selection to ensure L-3 remains compliant with regulations, he says.

“We’re not stepping out of this and just watching the process play out,” he says.

Boeing is the second competitor to lodge a complaint with the air force over the cross-deck effort after Bombardier filed a protest in March, which the GAO dismissed as premature. The agency also noted that while there is consideration of a sole source contract, the USAF has not yet issued a solicitation. Stéphane Villeneuve, vice president for Bombardier specialized aircraft, would not comment further on Boeing’s protest but said the company is still evaluating its options.