The Boeing KC-46A Pegasus has now exercised each of its major fuel systems after being topped up by another US Air Force KC-10 tanker on February 13 over Washington state.

The in-flight refuelling demonstration marks the third of six planned aerial contacts that support a “milestone C” decision currently scheduled for early May, which would unlock low-rate production funding for batches of seven, 12 and 15 aircraft. 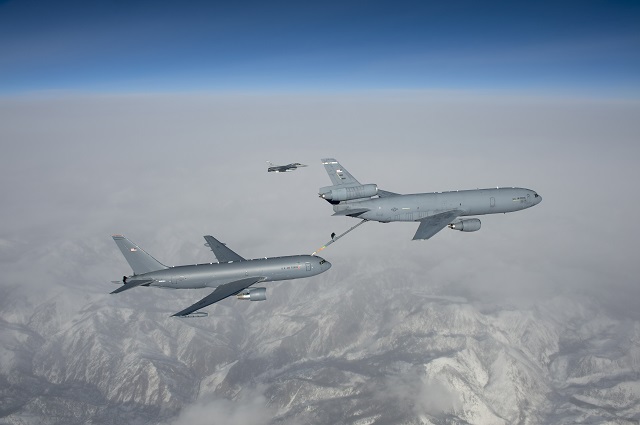 “We also did a ground demonstrations to make sure the main cargo deck can be reconfigured in two hours or less in multiple configurations, for passengers and transportation support pallets for aeromedical evacuation missions. That’s all been done,” Richardson said in the interview on 19 February. “Right now, we’re doing a lot of documentation clean-up and those aerial refuelling demos before we can go to that milestone decision.

“We’re driving toward being ready for that decision by April but we just got word in the last couple of days that the meeting in now scheduled for early May.”

The delay is due to the schedule availability of undersecretary of defence for acquisition, technology and logistics Frank Kendall.

Richardson has been aiming to award Boeing its first low-rate initial production lot in May, followed by the second award for 12 aircraft in June. The third tranche of funding for 15 aircraft is due in January of 2017. 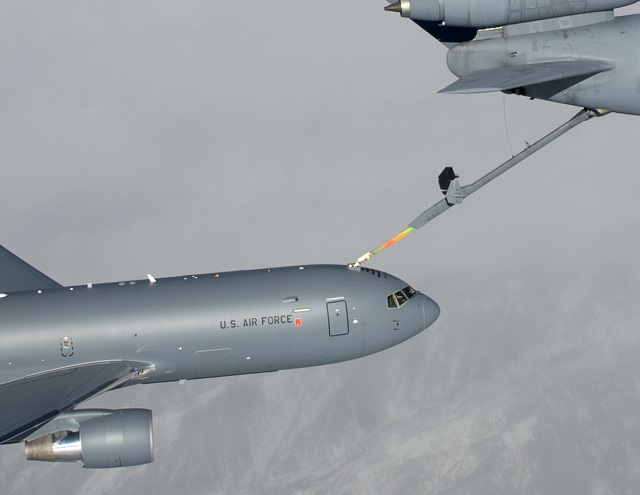 Air Mobility Command (AMC), the organisation that operates the service’s tanker and transport fleets, hasn’t decided on the KC-46A initial operational capability (IOC) date yet, reflecting some uncertainty about exactly when all the aircraft, personnel and training infrastructure will be in place.

Boeing has only produced two of the four required engineering and manufacturing development (EMD) aircraft required under the contract. Currently, only one 767-2C and one KC-46A are flying.

Richardson attributes this delay to Boeing holding off buying the remaining wiring bundles to ensure the wiring installation is as close to the final product as possible. That point is not related to an earlier wiring issue that drove up Boeing's costs and delayed development — that was associated with wire safe-separation, redundancies and shielding.

The second functional tanker, EMD-4, is completing its final functional checks and will fly very soon, says Richardson. The second 767-2C will join the test campaign around April.

“Once we get all four flying we’re going to be able to burn through the flight test conditions a lot faster,” Richardson says.

The first boom contact with a Lockheed Martin F-16 occurred on 24 January, with 726kg (1,600lb) of fuel transferred. During the Boeing F/A-18 demonstration on 10 February, 1,315kg of fuel was transferred via the KC-46’s centreline drogue system followed by a 635kg transfer from the left and right wing aerial refuelling pods. The Boeing KC-10 passed 2,812kg of fuel to the KC-46 on 13 February.