Boeing has revealed a narrow, nose-on view of the company’s bid to win a three-way competition to build the MQ-25 Stingray, a carrier-based unmanned air system (UAS) that the US Navy plans to use as an in-flight refueler to extend the range of manned fighters.

The image reveals a design likely derived from a concept that Boeing first developed for the unmanned carrier launched surveillance and strike (UCLASS) programme, which the Navy replaced with the MQ-25 tanker concept.

Boeing’s candidate for the MQ-25 will feature a dorsal air intake for a jet engine, conventional wings and large, extremely canted stabilisers. The fuselage cross-section appears wide and somewhat trapezoidal, suggesting ample volume for storing fuel as payload. If a wing fold mechanism for this carrier-based aircraft exists, it appears to lie outboard of the narrow section of the wing revealed in Boeing’s picture. 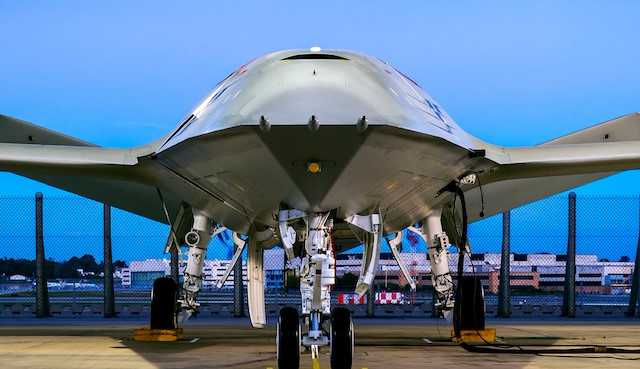 The release image shows the aircraft apparently outside on the flight line at Boeing’s defence base in St. Louis, with a thick power cord plugged into the side of the aircraft and a “remove before flight” streamer dangling from the nose landing gear.

The latter feature supports Boeing claim that the aircraft is nearly ready to begin deck handling demonstrations on the ground early next year.

The three bidding teams, including General Atomics Aeronautical Systems (GA-ASI) and Lockheed Martin — must submit final proposals for the MQ-25 contract to the navy by 3 June. GA-ASI has already revealed their proposal as a straightforward derivative of the jet-powered Predator C Avenger UAS. Lockheed has reveal a only tiny glimpse of the company’s proposal, showing a refueling pod attached to a small section of a wing.

For Boeing, the competition offers a chance to secure a rare opportunity to develop a completely new support aircraft for the US military, as well as gain a programme of record for building a large UAS.

“Boeing has been delivering carrier aircraft to the Navy for almost 90 years,” says Don Gaddis, refueling system programme leader in Boeing Phantom Works. “Our expertise gives us confidence in our approach. We will be ready for flight testing when the engineering and manufacturing development contract is awarded.”