A few shadowy glimpses of the trainer appeared over four videos posted on Boeing’s new T-X website over the weekend. The clean sheet design has two engine inlets, a high mounted wing and a conventional, vertical tail. That design marks a departure from Boeing’s original V-tail concept the company put forth before partnering with Saab. The new aircraft’s design is also unique from the Boeing T-45 Goshawk used by the US Navy.

Boeing’s T-X bid not only includes the aircraft, but the ground based training and support system. The company plans to hold a Sept. 13 media day surrounding T-X, just a week before for the annual Air Force Association conference held outside Washington, D.C. 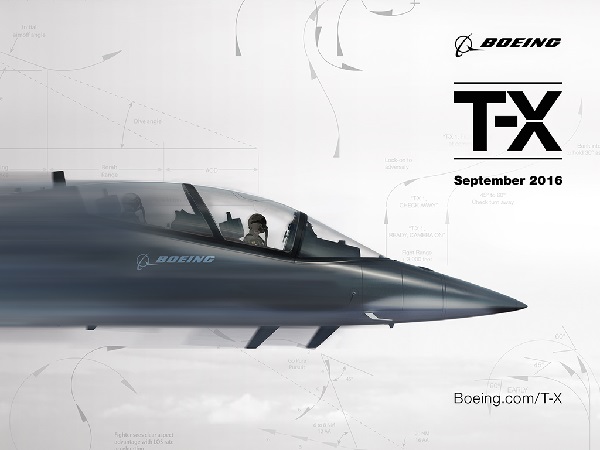 While Boeing and Saab move ahead with their clean sheet offering, Northrop Grumman and BAE Systems have also created a unique aircraft for the T-X competition. Northrop’s Model 400 is powered by a single GE Aviation F404-GE-102D engine and was revealed last week in Mojave, California. The aircraft’s pointed nose and single, vertical fin resemble Northrop’s legacy T-38 Talon.

Meanwhile, Raytheon and Leonardo will implement a block upgrade to an existing airframe for their T-X offering. Last month the two companies unveiled a multi-role version of its M-346 trainer at the Farnborough air show. The M-346T can switch between a trainer and combat role, and development will wrap up in about two years.