With South Korea just weeks away from selecting an aerial refuelling tanker, Boeing is touting the combat capability and lower projected life-cycle cost of its KC-46A offering as reasons for a Pegasus downselect.

The Boeing KC-46A tanker is going up against the Airbus A330-based Multi Role Tanker Transport (MRTT) and a converted B767-200ER MRTT design offered by Israel Aerospace Industries. Airbus has orders from six countries for 35 of its tankers, and two dozen have been delivered to date. More recently, the Netherlands, Norway and Poland have decided to jointly acquire between four and eight Airbus tankers.

Airbus can boast that its type is already flying and combat-proven, whereas the KC-46A is still in development with a first full-up tanker flight expected this summer. In fact, the A330 MRTT launch customer, the Royal Australian Air Force, recently completed air-to-air refuelling trails with its E-7A Wedgetail early warning and control aircraft – adding a new aircraft type to the growing list of receivers.

Still, Boeing can claim the world’s largest tanker operator, the US Air Force, as its base customer. The service has ordered 179 Pegasus tankers, and will eventually certify KC-46A to refuel 64 or more domestic and international aircraft types. The US has a larger requirement to replace nearly 400 ageing Boeing KC-135s that have been flying since the early days of the Cold War.

Boeing maintains that supporting the USAF requirement is “job No. 1”, but securing Korea as the first international customer would be a strategic win that puts the programme in a better position to compete for Japan’s upcoming tanker contract. Korea plans to buy four tankers and could announce a decision within weeks, if not next week, according to one source. A formal request for proposals from Japan is also due out soon.

Boeing’s assessment is that Korea and Japan’s long-standing security relationship with the United States, coupled with opportunities for local industrial participation, position it well against Airbus – a French-German consortium.

Going into the downselect, Boeing KC-46 spokesman Chick Ramey says the KC-46A is the best option for countries like Korea that are seeking an interoperable, new-generation multirole tanker.

“Acquiring the KC-46 now enables the host nation to dove-tail with the USAF program,” Ramey tells Flightglobal. “That means being compatible and completely interoperable with the world’s largest air force and tanker fleet from day one.” 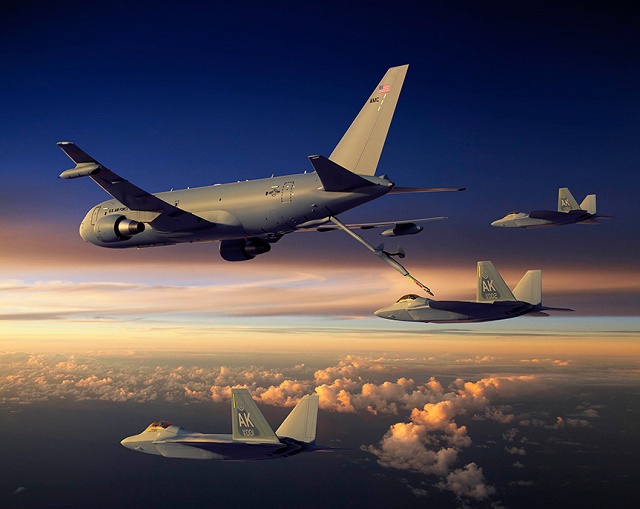 In terms of combat capability, Boeing believes its KC-46A has the edge.

Ramey says the aircraft is designed to operate through a nuclear or biological attack, and is hardened against an electromagnetic pulse. Sections of the aircraft are also armoured against medium-calibre gunfire.

On cost, one Boeing official, who asked not to be named, says the KC-46A has a higher up-front procurement cost than the Airbus offer, but will cost about 25% less to own and operate.

“I don’t think it’s any secret that we’re more expensive than Airbus,” the official says. “Are we out of the market? No. The KC-46 is much cheaper to operate over its life cycle. It consumes less fuel. Parts and maintenance is very affordable.

“Our analysis shows we’re probably about 25% cheaper than our competitor, so while you might pay a little more up front in acquisition, over the life-cycle it’s a more affordable airplane.”

“It is a right-sized aircraft that provides the ability to operate from a large variety of smaller airfields and forward-deployed, austere bases – a key essential for humanitarian missions,” says Ramey.

In terms of sheer volume, though, the Airbus A330 MRTT comes out on top. The aircraft can carry far more fuel and passengers than the KC-46. But Boeing notes that the greater size makes the MRTT less flexible and more expensive to operate. An A330 tanker can carry 290 passengers compared to a maximum of 110 on the Pegasus. 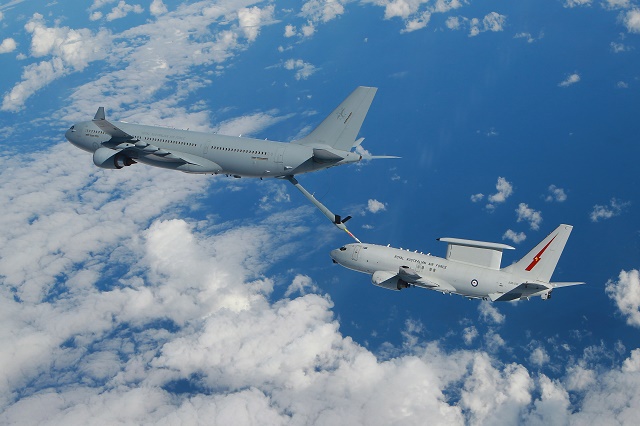 An Australian KC-30A MRTT conducts an air-to-air refuelling test with a E-7A Wedgetail in airspace near RAAF Williamtown.