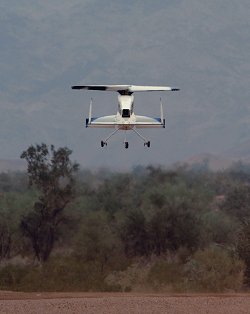 The X-50A made a 4min hover flight at the US Army’s Yuma Proving Ground in Arizona on 2 December, reaching an altitude of 20ft (6m) and verifying its revised flight-control software and minor hardware modifications developed to counter problems that led to the first X-50A’s crash in March 2004.

The stopped-rotor design, which combines the speed and range of a fixed-wing aircraft with the flexibility of a helicopter, is being developed jointly by Boeing Phantom Works and the US Defense Advanced Research Projects Agency (DARPA). The test followed a 30sec preparatory demonstration on 4 November which verified the ability of the software and new rotor torsion springs to compensate for the cross-coupling issues that led to the earlier crash.

An 11-sortie test campaign will continue through the first quarter of 2006, gradually expanding the CRW’s flight envelope under the remote control of a pilot in a ground station cockpit. The process will start with extensive hover flights before advancing to forward-moving rotary-wing flights and concluding with “the first ever ‘conversion’ from rotary-wing to fixed-wing flight and back again for landing”, says Boeing.

Boeing’s A160 Hummingbird made its first test flight re-engined with a six-cylinder Subaru piston engine from an airfield near Victorville, California on 30 November. Originally developed by Frontier Systems, the craft flew for 30min, boosting total A160 testing to 58 flight hours in 32 sorties since January 2002. Forthcoming tests will “continue envelope expansion in the new configuration,” says Boeing. Incorporating an unconventional variable-speed rigid rotor, the Hummingbird is also being developed and tested by the Phantom Works in conjunction with DARPA.

The system uses tapered blades with a varying cross-section from root to tip to allow the 11m-diameter rotor to operate over a wide range of rotational speeds, providing more efficient flight and higher performance. The air vehicle can operate autonomously or under remote control and carry a sensor or communications payload weighing up to 450kg (990lb).