Sixty-one years since the type’s first flight, the US Air Force is upgrading the weapons bays of the Boeing B-52 to carry satellite-guided conventional munitions.

A crew of Boeing and US Air Force technicians installed a prototype of the new weapons bay launcher in a B-52 at Edwards AFB, California. 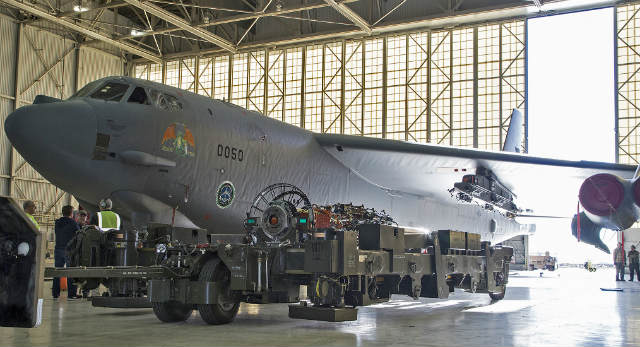 The initial version will allow the B-52 to carry satellite-guided Boeing joint direct attack munitions internally.

Future upgrades should give the bomber the ability to carry stand-off munitions, such as the Lockheed Martin AGM-158 joint air to surface standoff missile (JASSM) and the Raytheon ADM-160 miniature air-launched decoy, Boeing says.

The B-52 carries such so-called “smart” weapons on wing-mounted pylons now. Moving the weapons into the internal bays should reduce fuel consumption by 15%, Boeing says.

It also means the B-52 can carry eight more cruise missiles inside the weapons bay.