Boeing has defeated an unnamed challenger to secure a 10-year contract worth up to $855 million for Northrop T-38C Talon avionics and logistics support, maintaining its involvement with the widely-used aircraft through 2026 as the US Air Force fields a replacement “T-X” combat trainer.

Boeing completed a major T-38A/B avionics suite upgrade in 2007, converting 463 Talons to the T-38C standard by replacing analog components with a new digital cockpit. Northrop Grumman, meanwhile, has delivered replacement wings sets over the past decade, while general upkeep of the 55-year-old supersonic trainer is managed organically from the air force’s Ogden Air Logistics Complex at Hill AFB in Utah.

Meanwhile, structural upgrades to more than 150 T-38s through the “Pacer Classic III” structural modification are being performed by maintainers, extending the venerable trainer’s life to 2029. 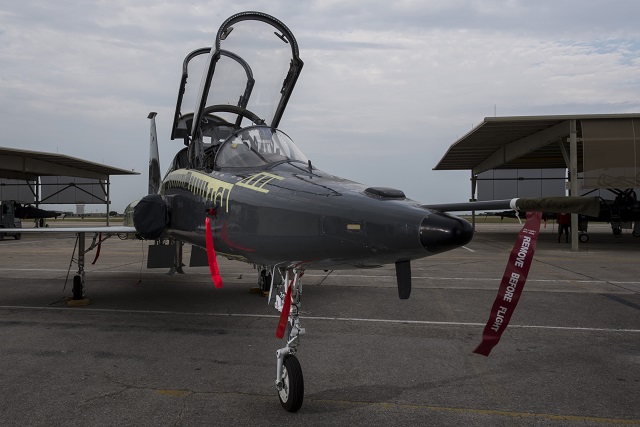 The first T-38 Talon upgraded through the Pacer Classic III structural improvement effort was unveiled July, 2015, at Joint Base San Antonio-Randolph in Texas.

According to the contract announcement, two proposals were submitted. The second bidder has not been named, and it is not certain whether the rival might consider protesting the Boeing selection.

The T-38C supports US and NATO pilot training, preparing officers destine for front-line combat fighters and bombers including the F-15, F-16, B-1B, A-10 and F-22.

Industry teams, including Boeing/Saab, are already gearing up to replace T-38, eyeing an air force requirement for 350 high-performance aircraft to prepare pilots to enter fifth and sixth-generation combat jets, including the Lockheed Martin F-35.