The F-35 joint programme office expects British firm Martin-Baker to cover the cost modifying the US16E Lightning II ejection seat after it was deemed too dangerous for lightweight pilots.

Lt Gen Christopher Bogdan, who heads the F-35 JPO, says two seat-related fixes are being pursued and the government “is not paying a penny for the engineering and implementation of these fixes”.

“The supply chain from Lockheed through BAE Systems through Martin-Baker will bear the cost of fixing this, as they should,” he told reporters after a 21 October congressional heading.

At the hearing, Bogdan said the neck stress for lightweight pilots through the catapult ejection, wind blast and parachute opening phases at low speeds is too high. The chance of a potentially fatal neck injury from an ejection in the low-speed flight envelope is one in 50,000 flight hours for pilots under 61.7kg and the odds for those weighing 61.7kg to 74.8kg (165lbs) is one in 200,000.

“That is a very, very small risk,” Bogdan says. “There are many other airplanes in our inventory that we accept similar risks on.”

To resolve the problem, the programme office intends to install a head support panel between the parachute risers to prevent the pilot’s head from going back too far during ejection. Secondly, a switch will allow lighter pilots to slightly delay parachute deployment, thereby reducing the opening shock. 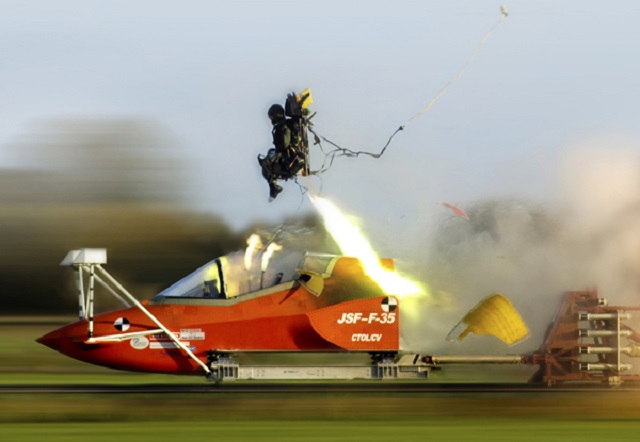 The programme office has also been working for six months to slim down the third-generation helmet-mounted display, produced by Rockwell Collins and Elbit Systems of America through their VSI joint venture. Today, the helmet weighs 2.31kg (5.1lbs) and the target is 2.18kg (4.8lbs).

The weight of the helmet is a significant cause of neck stress in the last-resort scenario of an ejection. Bogdan says the Gen-3 helmet mounted display has two visors, one for day and one for night flying, but one can be removed and the two can be made interchangeable.

The one US Air Force pilot that was deemed to light to fly received his own specially modified 2.13kg helmet, but a more production-representative light helmet is in the works. That pilot has since changed his career field.

Upwards of 140 aircraft have been delivered to date, and each will require all three modifications before the weight restriction can be lifted.

In another update related to the catastrophic engine failure at Eglin AFB last June, Bogdan says every Pratt & Whitney engine will be retrofitted with new parts by June 2016. About 44% of the fleet has already received the fix. “It was unfortunate, but we’re putting it behind us,” says Bogdan.