The greatest threat to the US long-range strike bomber (LRS-B) programme could be a submarine, with a new report showing that modernisation of the sea-based leg of the USA’s nuclear triad dwarfs planned spending on airborne assets.

At a congressional hearing on 25 June, the US deputy secretary of defense, Robert Work, said the Pentagon is going to need an average of $18 billion per year between 2021 and 2035 on top of what it already spends on the nuclear force, just to afford its planned submarine, bomber, intercontinental ballistic missile and cruise missile replacement efforts.

Work says without more money for nuclear modernisation, the Department of Defense will be forced to make “very, very hard choices” that would impact conventional weaponry.

“The choice right now is modernising or losing deterrent capability in the 2020s and 2030s. That’s the stark choice we’re faced with,” Work says, noting that the current nuclear force that has been in place since the Cold War is “aging out”.

He agreed with a recent analysis published on 23 June by the Center for Strategic and Budgetary Assessment (CSBA) that shows an almost doubling of spending on the maritime nuclear force in the mid-2020s, just as LRS-B production and spending peaks. 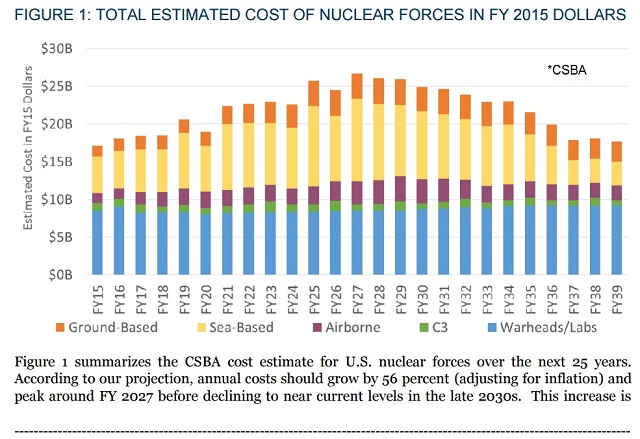 The US Navy will spend upwards of $10 billion on its Ohio-class submarine replacement programme up until 2020, for research and development and the purchase of long-lead parts. Spending will peak much higher once production of the 14 nuclear ballistic missile boomers scales up in 2021. Meanwhile, the US Air Force is trying to acquire a new dual-capable bomber to augment its decades-old bomber force.

The analysis said nuclear spending would peak at 5% of the DoD’s almost $600 billion top line, but Works says it is closer to 7% when the full cost of the bomber programme is taken into account.

In written testimony on 25 June, the head of the bomber force, Maj Gen Richard Clark, said LRS-B is due to become operational in the mid-2020s, just as navy spending on submarine production reaches new heights.

The commander of the Eighth Air Force said it is “imperative” that the government buy bombers in sufficient quantities to ensure an adequate number of aircraft are available in a contingency, and so they do not end up with a B-2 Spirit situation where there are just 20 aircraft and not enough spare parts.

“Many manufacturers do not see a strong business case in supplying parts for a small aircraft fleet,” Clark says of the B-2 programme. “Shortages of a single part can have a tremendous readiness impact on a small fleet that lacks the flexibility of a large force to absorb parts shortages and logistics delays.”

He also urged that the aging 1980s air-launched cruise missile must be replaced by the new long-range standoff (LRSO) cruise missile or else “capability gaps” will go unfilled. 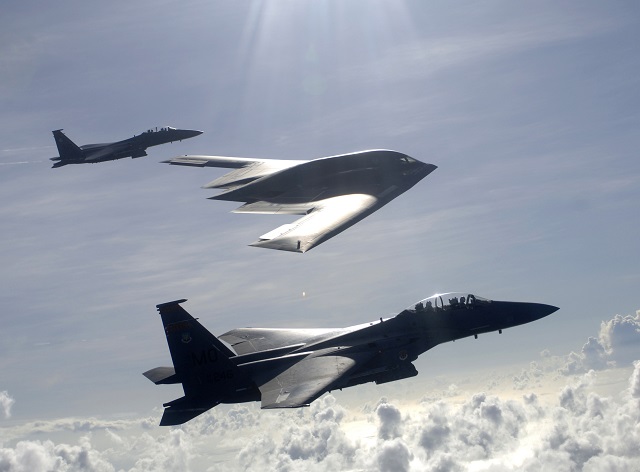 The air force is expected to select a bomber team this summer, either a Boeing-Lockheed Martin partnership or Northrop Grumman.

The service wants 80 to 100 bombers at a cost of almost $600 million each in today’s dollars. Work says the order of delivery is first the submarine, then the bomber and LRSO cruise missile in addition to Lockheed Martin F-35 Joint Strike Fighter integration with the B61-12 nuclear bomb. The air force owns 70% of the nuclear mission and has the most to gain from extra spending on modernisation.

Discussions about modernising the US nuclear force have been spurred by the nuclear posturing of Russia, as well as China’s increased investment in its nuclear capabilities. “They are undergoing a wide-ranging modernisation of their entire nuclear force,” Work said of the two nations.

One solution to the looming fiscal hump is the creation of a “strategic deterrent fund”, similar to what the navy has for shipbuilding.

Congress has approved legislation that would create such a fund as part of its fiscal year 2016 spending bill.

“As a nation we have always found a way to provide what we need for our defence,” says Work. “We need to start thinking about how to solve this particular challenge together.” 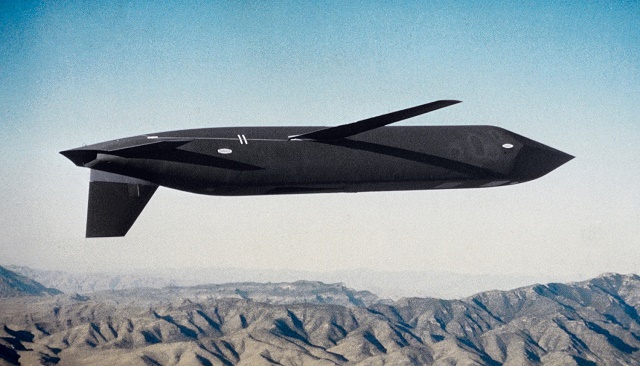