German charter company Air Hamburg is preparing to take delivery of its sixth Embraer Legacy 650E in October, which will cement its position as the world’s biggest operator of the large-cabin business jet series.

“This aircraft is now in the final stages of completion at Embraer’s São José dos Campos facility in Brazil, and its arrival next month will bring our fleet of Legacy jets to 14,” says Air Hamburg owner, Simon Ebert. The twinjet will bear the registration D-AIRG.

The operator's line-up includes six 650s – the predecessor to the E-variant – and a pair of first-generation 600s.

The company became the launch customer for the Legacy 650E in 2017, with an order for three of the $26 million type, all of which have entered service. Unveiled in 2016, the 3,900nm (7,220km)-range aircraft has a host of new features, including a synthetic vision system and autothrottle as standard, and a restyled, three-zone interior with full HD in-flight entertainment. 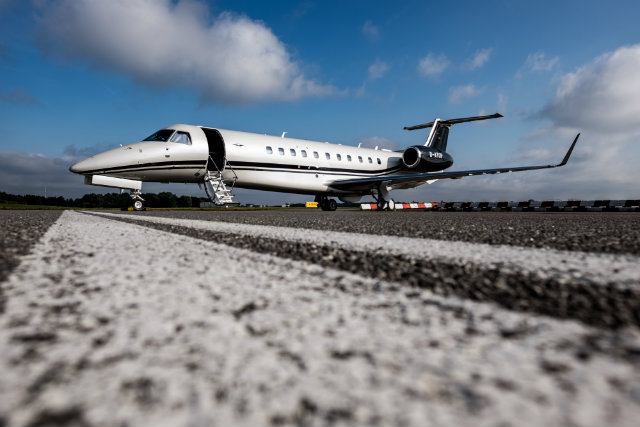 A follow-on order for four aircraft was placed in May, and Air Hamburg took delivery of the first two examples in June and July, respectively. “The final 650E will arrive in February 2019, and we are now in discussions with Embraer to purchase more aircraft,” Ebert adds.

He says the aircraft will fulfill growing demand for ad hoc charter from business and leisure travellers in Europe, Russia, Saudi Arabia and the United Arab Emirates.

Air Hamburg is logging between 1,300-1,400h per year on each Legacy, and around 900h on each of its light jets. In an attempt to widen its international reach, Air Hamburg has acquired a pre-owned Dassault 7X. The eight-year-old, long-range trijet will join the line-up in November on completion of a maintenance C-check, says Ebert, and carry the registration D-ASIM.

“The 7X will allow up to fly nonstop from Germany and Russia to North America and Asia. We currently have to make a few fuel stops on these routes with the Legacy,” he adds.