The coronavirus outbreak pummelled business aircraft activity in March across Asia, Europe and North America, according to German research company WingX Advance, with the decline set to continue throughout April as travel restrictions strangle demand for charter, corporate and private flying.

Asia recorded the steepest decline in business aircraft traffic, from 7,600 departures across the region’s airports in March 2019 to just under 5,000 last month – a fall of over 35%. China was worst hit, with traffic dropping by over two thirds year-on-year to 300 flights, while Singapore, a close second, recorded a 60% fall in traffic to 150 departures of instrument flight rules-operated business jets, turboprops and piston-engined aircraft. 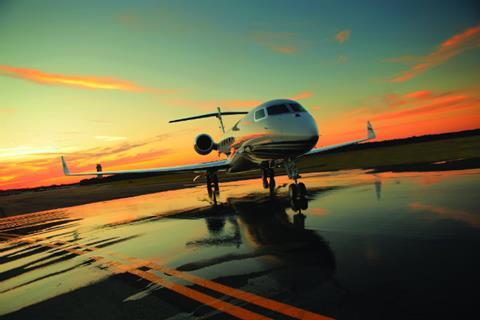 Departures from European airports fell by over a third, from 53,400 in March 2019 to 35,500 last month. “The decline accelerated towards the end of March, with the last few days seeing close to 50% reductions,” says WingX.

Italy recorded the largest slide, with just over 1,000 departures in March, marking a decline of more than 70% year on year.

Activity in France, “normally the busiest European market”, was down by 43% to 5,400 business aircraft departures across its airports. Germany and Switzerland each saw declines of over 30%, to 4,900 and 2,700 flights, respectively, while departures from UK airports fell by nearly a quarter year-on-year, to 5,800. Sweden was the only country in Europe to buck the downward trend, WingX reveals, recording a 1.3% increase in departures, to 1,500.

WingX’s data shows the greatest decline in traffic was for long-range business jets, with the sector recording a fall in flights of over 40%. Activity by managed aircraft plunged by 50% year-on-year, and fractional ownership flights by 40%, while branded charter and corporate flights slid by 20%. By contrast, air ambulance and emergency support traffic more than doubled in volume, from 1,000 flights in March 2019 to 2,200 last month.

Activity in North America fell by nearly a quarter during the same period, to 214,000 flights, with the USA, the world’s largest business aviation market, the hardest hit. Flights from the country’s airports dropped by 30% year-on-year to 193,500, says WingX, with the decline “gathering momentum” in the second of half of the month. “Activity levels on 31 March were down by two thirds compared with the same date in 2019”, it notes.

“The abruptness of the decline in business aviation activity in March is only comparable to the effect of the Eyjafjallajökull volcano eruption [in Iceland] back in 2010, only with much longer and more severe consequences,” says WingX founder and chief executive Richard Koe.

WingX expects a “trough” in flight activity in April, “which may see some countries completely shut down flights”, says Koe.

“With an optimistic outlook for ending virus containment, we might see renewed demand for flights by the summer, at which point business aviation may have a window of opportunity to meet pent-up demand whilst the airline capacity is still parked,” he adds.