In-flight connectivity providers are unanimous in their belief that fast, reliable wi-fi tops the priority list for business aviation users. Passengers increasingly expect airborne internet connections to be as good as those on the ground, and providers are responding by increasing the speed and capacity of their solutions.

In-flight connectivity providers are unanimous in their belief that fast, reliable wi-fi tops the priority list for business aviation users. Passengers increasingly expect airborne internet connections to be as good as those on the ground, and providers are responding by increasing the speed and capacity of their solutions.

While incumbents boast of enhancements to existing products and outline developments, new entrants are poised to bring even more competition to the market when they launch new services early next year.

Collins Aerospace announced in September that it had teamed up with satellite company SES to create LuxStream – a new Ku-band connectivity service for business aviation that promises to offer “the fastest broadband speeds available within the USA” when it launches with Vista Global late in the first quarter of 2020.

Both Inmarsat and Viasat have announced faster speeds on their existing satellite-based connectivity services for business aviation, while ATG provider Gogo said earlier this year that it was building a new 5G network that will be available for business and commercial aviation use in 2021.

Collins Aerospace is targeting early adopters of in-flight connectivity who are seeking to replace older systems with a faster broadband solution that can meet the high expectations of business aviation passengers. Its new LuxStream service will offer speeds of up to 25 megabits per second (Mbps) in the US and 15Mbps globally, which it claims are “unparalleled in the industry”.

“Opportunities are starting to shape up with first-generation connectivity solutions getting long in the tooth,” says LeAnn Ridgeway, vice-president and general manager of Collins Aerospace’s Information Management Services division. She adds that “a lot of early adopters are looking to replace” their existing systems to meet the needs of customers whose “consumption and expectations have gone up to what we do in our homes”.

LuxStream will form part of Collins Aerospace’s ArincDirect portfolio of services. Supported by Astronics AeroSat’s tail-mounted antenna technology and a Collins Aerospace cabin router, it will initially be installed on 36 Bombardier Global aircraft operated under the VistaJet brand. The service is powered by SES’s new network of three geostationary, high-throughput satellites, launched in the last two years to provide “a tremendous amount of capacity” that can be flexibly allocated, says Collins Aerospace JOB TITLE TO COME Stephane Aliaga.

“Historically, we’ve used commercial, off-the-shelf routers but we’ve run into obsolescence issues, so on this system we chose to invest in our own router,” says Ridgeway. All sales and technical support will be provided by Collins Aerospace, making the service a “one-stop-shop, turnkey solution".

“[SES] were able to work with us on flexibility so we could offer flexible price packages. Beyond that, and equally important, is that this is a dedicated SES network and we are not competing with commercial aircraft,” adds Ridgeway.

LuxStream is primarily targeted at the large cabin retrofit market, but Collins Aerospace is also seeking line-fit status, which Ridgeway says would be “nice to have within a 12-month period”. 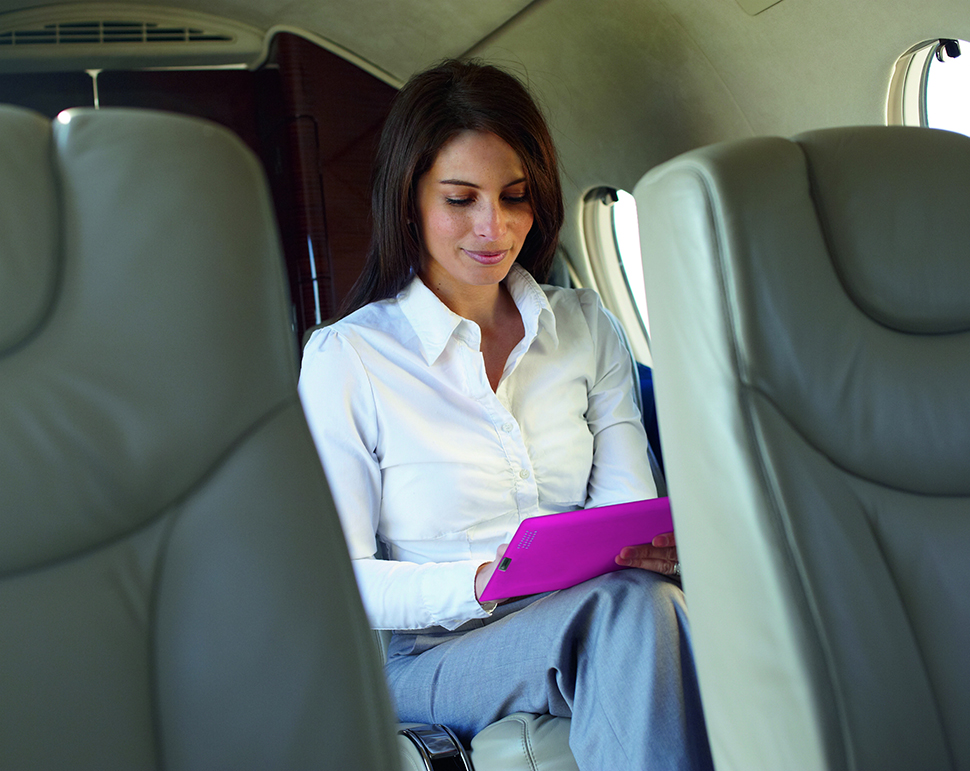 As Collins Aerospace talks up the speed of its new Ku-band service, Viasat announced in September a doubling of speeds on its existing Ku-band business aviation service to up to 10Mbps. The California-based satellite provider says its Ku-band service can easily be upgraded to its higher capacity Ka-band connectivity solution, which currently offers speeds of up to 16Mbps. This will rise to 32Mbps when the ViaSat-3 constellation enters service from 2021.

The upgraded Ku Advanced service is aimed at “value-minded business jet owners” who want more speed at a lower cost. It can be installed for a “flyaway price” of $400,000, says James Person, director of business development and strategy for Viasat’s business aviation division.

"Ku Advanced has twice the power of our previous business aviation terminal. It provides up to 10Mbps globally, so it supports streaming at the lower price point. It’s also a quick and easy upgrade path for people who are not quite ready for Ka,” says Person. Viasat customers can opt for its Ku Advanced or Ka-band service, or a combination of the two networks through its dual-band solution.

The first ViaSat-3 satellite will enter service over the Americas in 2021, followed six months later by a second one covering the Europe, Middle East and Africa region. The third satellite in the constellation is due to enter service in the second half of 2022, at which point Viasat says it will offer global Ka-band connectivity.

Rival satellite company Inmarsat, which serves the business aviation market with its Ka-band Jet Connex service, announced earlier this year the addition of a new “top-end package” to provide “data-hungry” customers with unlimited data usage and speeds that are 33% higher than Jet Connex’s previous fastest plan.

The new plan, JX-Pro, offers speeds of “up to 20Mbps”, and the company has seen “a very healthy dose of interest” in the market since its launch in May, says Inmarsat senior vice-president business and general aviation Kai Tang.

Inmarsat is “still enjoying a very heathy adoption” of Jet Connex in the market and has installed the system on “well north of 500” business aircraft, says Tang.

Jet Connex is supported by four Global Xpress (GX) satellites, but the constellation will expand to 10 satellites in the coming years. GX5 is scheduled to launch later this year over Europe and the Middle East, with two additional payloads – GX6A and GX6B – due to be in orbit by mid-2021.

Earlier this year, Inmarsat contracted Airbus Defence & Space to manufacture three more next-generation satellites – GX7, 8 and 9 – the first of which is scheduled to launch in the first half of 2023. These three satellites will be “the most cutting edge”, says Tang, and each will add “as much capacity as the existing worldwide GX constellation”. Inmarsat “will look at GX10A and 10B” in 2022, which would provide coverage of the Arctic, says Tang, at which point coverage maps will become “a thing of the past”.

Inmarsat appears to have slowed down plans announced in May 2018 to bring its European Aviation Network (EAN) hybrid connectivity solution to the business aviation sector as an additional option alongside Jet Connex.

EAN integrates connectivity from a satellite operated by Inmarsat with an LTE-based ground network operated by Deutsche Telekom. It covers all 28 EU member states, as well as Norway and Switzerland.

The service has been launched in the commercial aviation market by International Airlines Group (IAG), and Inmarsat said in mid-2018 that it would also be made available to business aviation operators from the beginning of 2019. However, Tang now says it will work with undisclosed partners to offer EAN to the business aviation sector “when the time is right”.

“EAN is not on the backburner but it’s certainly something that’s new to the industry and we want to make sure we’re doing everything properly with these interested parties,” he notes.

While EAN’s smaller and lighter hardware would enable Inmarsat to target smaller business aircraft that are not suitable for Jet Connex, Tang says the company’s focus now is on Jet Connex because it has seen “such incredible demand” for the satellite-based service.

This means that, for now, the ATG portion of the connectivity market remains in Gogo’s – and soon-to-launch SmartSky Networks’ – hands.

Gogo Business Aviation offers a 4G AVANCE L5 ATG connectivity service, as well as a smaller 3G version known as AVANCE L3 for light jets and turboprops. While L5 and L3 sales are “still very strong”, Gogo will be “talking a lot” at NBAA about its new 5G service, says the division’s president, Sergio Aguirre.

Gogo announced in May that it was building a 5G network that would be available to business and commercial aviation users in 2021. The company is building the network on its existing infrastructure of more than 250 towers and will use unlicensed spectrum in the 2.4GHz range. It says it will continue to employ its 3G and 4G networks throughout the continental USA and in Canada, and these will provide backup to the 5G network when needed.

AVANCE L5 customers will be able to upgrade to the 5G network by switching the antennas, but all the wiring remains the same. This makes it an “easy upgrade” to perform, says Aguirre.

“The speed and performance of the ‘power of five’ is better than anything that’s available in business aviation,” says Aguirre, adding that the service will offer a “superior performance” to, and be “more affordable” than, satellite-based in-flight connectivity solutions, which he says are two and a half times more expensive and have issues with latency (the amount of time it takes to transmit and receive data).

Until smaller satellite terminals become available, Aguirre points out that satellite-based broadband can only be installed on larger business aircraft, whereas Gogo’s service is suitable for “King Airs up to VVIP aircraft”. The 5G network will ensure that “all business aviation [operators can] now have a connectivity system that allows them to do anything they do on the ground, in the air”.

Gogo faces competition in the ATG market from SmartSky Networks. The start-up has modified a network of leased ground towers to support a new 4G LTE ATG service that will launch in the first quarter of 2020 with JetSuiteX – the bespoke public charter arm of US air taxi company JetSuite. The first 20 Embraer 135 aircraft will be equipped with the system by the end of this year.

SmartSky says its 4G network includes “many 5G components” and can “incorporate advancements appropriate for ATG as those technology upgrades become available”. The company claims its service will be 10 times faster than legacy airborne internet solutions, and is promoting it as being a low-latency system with bi-directional capabilities, meaning data can be transferred to and from the aircraft.

“Latency is a significant factor and it’s a key aspect and differentiator for SmartSky Networks. Latency is a major factor in network performance and it’s crucial to the user experience,” says SmartSky director OEM account management Kieran Kennedy.

Another point to consider alongside higher latency when it comes to satellite-based connectivity is the potential for things to go wrong in the rare event of a satellite failure. Intelsat, for instance, announced at last year’s NBAA that it was entering the business aviation connectivity market with the launch of its Ku-band FlexExec service.

In April, however, one of the satellites supporting the service – Intelsat 29e – suffered an in-orbit failure. Satcom Direct, a FlexExec distributor, says that while Intelsat’s layered network meant that customers did not lose connectivity, the loss of the satellite did affect the quality of the service.

“Losing a primary asset for them [Intelsat] was a big thing, but we think they’ll have full restoration of service by early 2020. This does show one thing with the geostationary [satellite] network – if they lose a primary asset, it’s a big deal,” says Satcom Direct president business aviation Chris Moore.