Israeli start-up Eviation Aircraft has closed the latest funding round for its Alice all-electric business and commuter aircraft, and says it now has enough money to finance the programme through certification and into production.

The latest tranche of capital, secured from strategic investors in early January, brings the total investment in the programme to around $200 million.

Eviation hopes to fly Alice ahead of Paris air show in June, where the aircraft will have its first public outing. But company co-founder and chief executive Omer Bar-Yohay says the debut sortie – from Vannes or nearby Nantes – is dependent on the prototype securing airworthiness approval from the European Aviation Safety Agency before the end of May.

"If it is forthcoming, we will probably test fly the aircraft in France until the end of July and then ship it to our new US base in Prescott, Arizona, to continue the flight-test campaign there," he says. "If we cannot fly Alice before Paris, we will do ground testing in Vannes instead, and then ship it to the USA immediately after the show."

Bar-Yohay says Eviation selected Prescott "due to the city and the state's pro-business and pro-aviation stance". The town is also home to Embry-Riddle Aeronautical University (ERAU) campus, which Bar-Yohay describes a "hotbed of extremely talented engineers and pilots".

In December, Eviation teamed up with ERAU Prescott to launch a research and development programme. Starting early in 2019, the companies will focus on performance analysis, validation, testing, along with preliminary design and sub-scale testing of future electric propulsion and airframe design concepts.

"We will bring new ideas and designs, and do feasibility testing with these bright students," says Bar-Yohay. "It’s a win-win arrangement for both parties." Eviation will also draw on ERAU expertise for Alice, "especially its pool of highly skilled flight-test pilots", says Bar-Yohay. 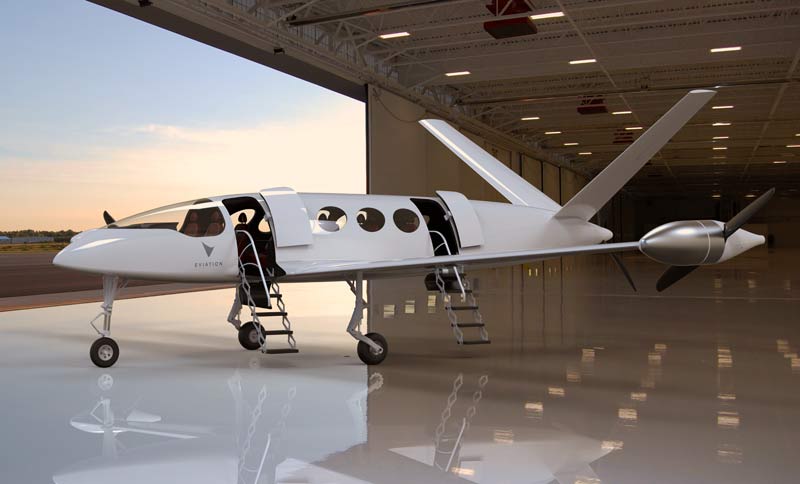 Three aircraft are planned for the flight-test campaign – two prototypes and a production-conforming example. Parts for the second Alice are now under construction and the model is scheduled to join the certification effort in the fourth quarter, he adds. The third aircraft will arrive in mid-2020 and type certification and service entry are expected in 2022.

Alice uses one main Hartzell five-blade pusher-propeller at the tail and two at the wing-tips, to reduce drag, increase redundancy and improve efficiency. Each prop is driven by a 260kW electric motor, powered by a 900kWh lithium-ion battery pack, giving Alice a range of 540nm (1,000km) and a cruise speed of 240kt (440km/h).

The all-composite aircraft will seat up to nine passengers and two crew in its 12m (39ft)-long fuselage. It is projected to have a maximum payload of 1,250kg (2,750lb) and a maximum take-off weight of 5,900kg.

The aircraft will also feature a bespoke fly-by-wire system and flightdeck, supplied by Honeywell.

Eviation opened the orderbook for Alice in October, and market response to the type has been very positive, says Bar-Yohay. "We have sold a number of aircraft and will give details of these sales at Paris," he adds.

The company is targeting Alice at commuter airlines and large business aircraft operators who are looking to introduce "cost-efficient and environmentally sound aircraft into their fleets".

"Alice's direct operating costs are $200 per flight hour with nine passengers, two crew flying at 240kt," says Bar-Yohay. "That is more than half the price of a similar-sized turboprop."