Embraer has stepped up the competition in the hotly contested midsize market with the launch today of not one, but two new aircraft, which it hopes will “fascinate” its customers, set a new benchmark in this crowded category and strengthen its business jet portfolio. 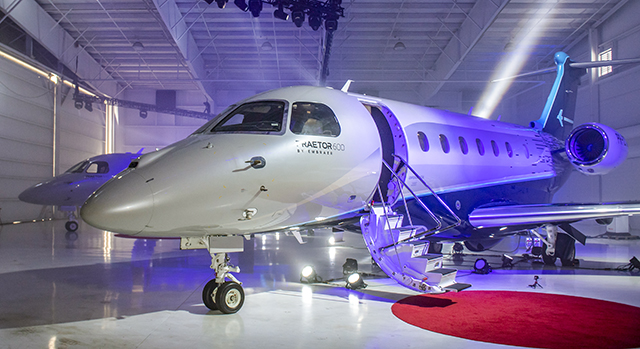 The midsize Praetor 500 and super-midsize Praetor 600 were unveiled at Top Gun–themed ceremony at Orlando Executive airport where Michael Amalfitano, president and chief executive of Embraer Executive Jets, described the pair as "disruptive aircraft for the entrepreneur, for the pioneer, for the innovator.”

Named after an army commander in Ancient Rome, he says the Praetor family “leads the way in redefining the characteristics of what a midsize and super-midsize aircraft deliver to the market.”

The HTF7500E-powered models support Embraer’s vision, he continues, of “fascinating our customers and providing them with superior value, and the best experience in the industry".

The Praetors fit in the company’s eight-strong product line between the Legacy 500 and Legacy 650E.

Development of the new jets began over a year ago, based on “extensive interaction”, Embraer says, with customers of its Legacy 450 and Legacy 500, of which they are derivatives, sharing the same fuselage and wing structure. “These are not clean-sheet aircraft, but they were developed based on the proven Legacy 450 and 500 platforms – introduced in 2015 and 2014 respectively – for which there are over 100 aircraft in operation to date,” says Embraer.

Although the Praetor 600 and the Legacy 500 have the same wing-fuel capacity, the former carries two additional fuel tanks – forward and ventral. The aircraft’s HTF7500E engines also have an additional 500lb of thrust. These features, along with winglets, give the Praetor 600 a sector-leading range of 3,900nm (7,220km) – over 760nm more than the Legacy 500 and almost 300nm longer that its closest super-midsize competitor, the Gulfstream G280.

The Praetor 500 has additional fuel cells in the wings, helping to deliver the longest range in the midsize sector at 3,250nm.

“Different by design and disruptive by choice, these new aircraft will deliver the ultimate customer experience with an unparalleled combination of performance, comfort and technology,” says Luciano Froes, Embraer's senior vice-president, marketing.

The Praetors are the only midsize and super-midsize business jets with full fly-by-wire technology and active turbulence reduction, with the latter designed to “give customers the smoothest possible ride”, says Embraer. The pair have a 5,800ft (1,770m) cabin altitude “for ultimate passenger comfort”. 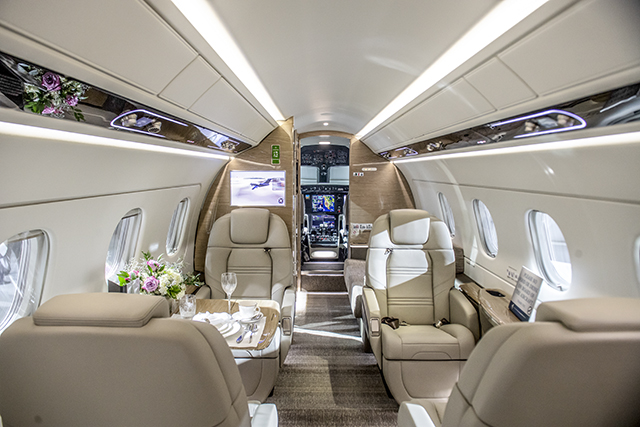 The cabins also feature a Honeywell Ovation Select cabin management system; Viasat’s high-capacity, Ka-band connectivity, boasting speeds of up to 16Mbps; Gogo's latest air-to-ground connectivity system, AVANCE L5; and internet protocol television. This service is described by Embraer as an “industry exclusive among midsize business jets” and allows customers to beam live TV shows directly to the aircraft via the internet. The company has also installed a unique “upper tech panel” built into the valance, which displays flight information and cabin management features.

The aircraft boast a bespoke premium interior, called Bossa Nova, which feature superior levels of craftsmanship and each customer’s personal design style reflected throughout the cabin.

The $21 million Praetor 600 will be first to market. Flight testing on the first prototype began on 31 March at Embraer’s Gavião Peixoto facility. Two more aircraft – a second prototype and a production-conforming example – have since joined the flight-test campaign, and around 300h have been logged across the fleet to date. The eight-seat aircraft is slated for type certification and service entry in the second quarter of 2019.

The $17 million Praetor 500 flight test campaign began on 13 September and the production conforming aircraft has logged around 80h Embraer says. Certification and service entry of the seven-seat jet are pegged for the second half of 2019.

The Praetors will share the same manufacturing lines as the Legacy 450 and 500 in São José dos Campos, Brazil and Melbourne, Florida.