The United Arab Emirates' secretive programme to adapt a pair of Bombardier Global 6000 business jets for an unspecified special-mission role has made a significant advance, with the lead example having been moved to the UK Ministry of Defence's Boscombe Down site in Wiltshire for further testing.

Heavily modified by the UK's Marshall Aerospace and Defence Group under an activity dubbed Project Dolphin, the surveillance aircraft was photographed at the company's Cambridge airport site in UAE markings in mid-August. It sports a plain white livery and the air force registration 1325. 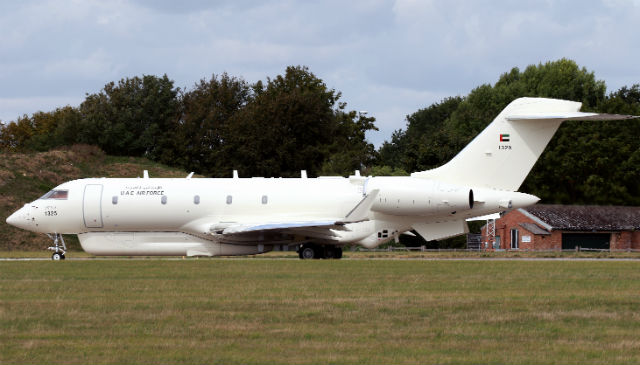 Flightglobal's Fleets Analyzer database identifies the Rolls-Royce BR710-powered twinjet as being manufacturer serial number 9494, which is six years old. The UAE's second example (1326/9517) is around six months younger, it shows.

No details have been released about the adaptation, but the aircraft's extensively altered configuration indicates that a likely role could be in performing electronic and signals intelligence-gathering tasks. Notable features include a large canoe fairing beneath the forward fuselage, which appears visually similar to the structure which houses a ground surveillance radar on the UK Royal Air Force's Global Express-based Sentinel R1s.

The aircraft also has gained ventral strakes below the rear fuselage for added stability, and a cooling intake ahead of the port-side engine to support onboard mission equipment. Other additions include a large number of antennae and a conformal satellite communications antenna on the upper fuselage, plus self-protection sensors installed around the airframe.

Project Dolphin is an entirely separate activity to the UAE's GlobalEye acquisition of three multi-mode surveillance-adapted Global 6000s from Saab. The Swedish company earlier this year performed its first flight of the platform, which will be capable of simultaneously monitoring airborne, ground-based and maritime threats.