Pilatus has delivered the first of six PC-24s to Australia's Royal Flying Doctor Service (RFDS), marking the debut of the superlight business jet in an air ambulance configuration.

Handed over on 26 November at the Swiss airframer's Stans headquarters, the aircraft (MSN105) will enter service in early 2019 with the RFDS Western Operations division, headquartered in Perth, Western Australia.

Pilatus chairman Oscar Schwenk describes the twinjet as an "emergency ward in the sky", providing long-haul, critical care for patients throughout the country.

The new jet will supplement the operator's 35-strong fleet of PC-12 single-engined turboprops – of which the RFDS is the longest-standing operator. A second PC-24 (MSN106) is scheduled for delivery in December to the service's central operation, headquartered in Adelaide, South Australia. 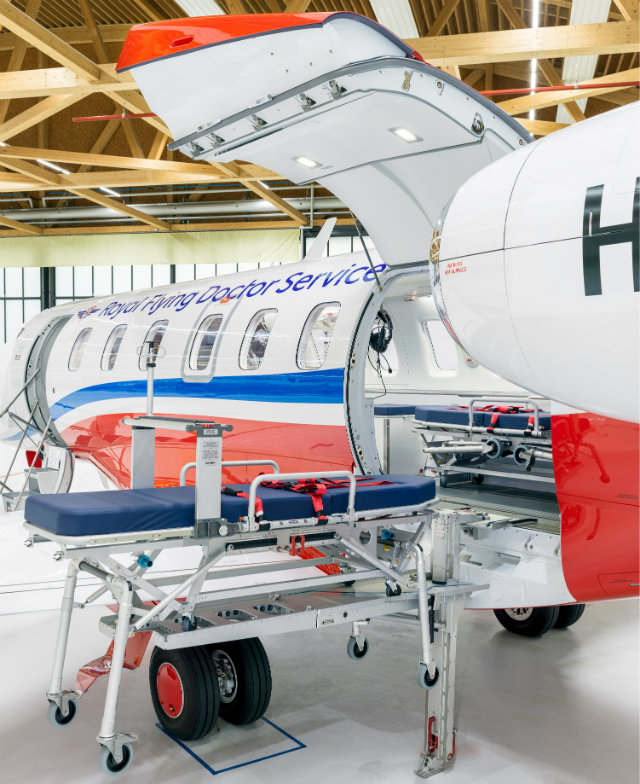 The Williams International FJ44-4A-powered aircraft was developed for outback use from the outset, Pilatus notes. "Its outstanding performance on short runways and unpaved strips will provide the RFDS with a previously unattained degree of flexibility of direct benefit to patients in Australia."

Approval for short and unpaved runway operations, allowing take-offs and landings from strips down to 856m (2,810ft), is "on track" for year-end, says Pilatus.

The RFDS's PC-24s have been developed in partnership with Swiss engineering and completions company Aerolite. Pilatus says the pressurised cabin can accommodate the required medical equipment, beds for three patients and additional seats for medical personnel.

"Depending on the type of mission, the cabin is designed to allow fast, flexible modification for maximum freedom," it says, while the PC-24's large cargo door and bespoke electric stretcher loading device "facilitate safe, ultra-easy loading and unloading of patients".

RFDS chief executive Rebecca Tomkinson describes the aeromedical interior as "the first of its kind in the world – a game-changer for patient outcomes and improving health care to regional and remote Australians".

Pilatus has delivered 16 PC-24s since the first example was handed over in January to launch customer PlaneSense. It plans to ship up to 23 aircraft this year.