Stratos 714 personal jet set to appear at AirVenture and NBAA

US start-up Stratos Aircraft says it will debut its 714 very-light personal jet at two leading US business and general aviation trade shows this year, in an attempt to attract investment in the high-performance type.

“We are planning to display the proof-of-concept aircraft at the AirVenture show in Oshkosh in July and at the NBAA business aviation convention in October,” says chief technology officer Carsten Sundin. “This will maximise the aircraft’s exposure and help bring new partners to the table.”

The 714 made its first flight on 21 November 2016, after a five-year development effort. It has since chalked up a further five sorties, each lasting around 30min. “We would have flown more if the weather conditions were favourable,” Sundin says, in reference to sub-zero temperatures at the company’s Redmond, Oregon base. “We will step up flight testing when the weather improves, and will start to expand the flight envelope.” 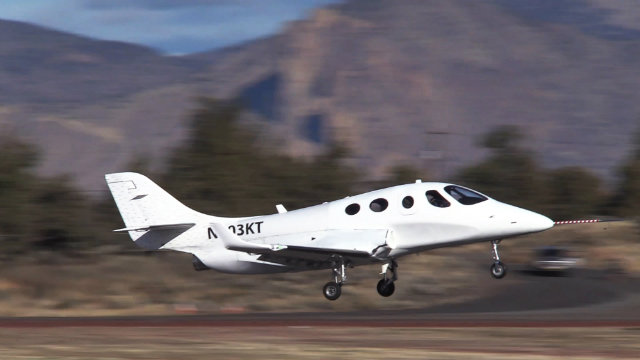 The aircraft has a projected top speed of Mach 0.7 with one engine and four passengers, with its 714 designation denoting these characteristics. The design goal also includes a range of 1,500nm (2,770km).

“There is nothing else like it on the market today,” Sundin says. The 714’s only competitor in the personal jet space is the in-production Cirrus SF50 Vision, which he says is about 100kt slower and has shorter range, at 1,200nm. “Our aircraft has the performance characteristics of a much larger business jet,” he says.

Stratos will not open the order book for the model until it is able to commit to a certification date. “We don't want to make promises we cannot keep,” Sundin says.