One of the few

Kathy McCullough flew 747s for Northwest until her retirement on medical grounds. An active member of ISWAP, she explains what she learned in more than 30 years as a pilot

It started in high school in Florida. I had a great physics teacher and when he was going to teach a class on aviation, I took it more because I liked him as a teacher as much as I had an interest in aviation. But I became hooked and, as a result of a field trip we did, took a weekend job at our local airport in Gainesville. I had a chance to take some flying lessons. When I went to college my mum told me: “You are not using this money for flying. It’s for a real education.” So I stopped flying for a while. Also my eyesight was 20:30 and the airlines at that time wanted 20:20 vision. However, after graduating in 1976, I managed to start flying again. I did some flight instruction and flew turboprops, and accumulated 2,000h. By 1981, the airlines had changed their eyesight rules and were recruiting again, and I managed to get onto a training course with Northwest to become a second officer. I was their fourth woman pilot – the first two had joined in 1979. 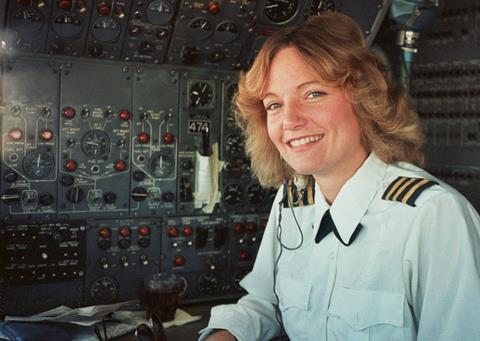 It began with psychological and medical assessments followed by a simulator ride to see if you really could fly, and then two months in ground school to learn the rules of the company and the systems on board the [Boeing] 727. I loved that part, learning the aircraft inside and out. Nowadays that sort of training tends to be computer based, but there is a lot to be said for being in a classroom with a whiteboard where you could practise turning things on and off. It was very interactive.

What were the attitudes to women?

There were two of us in the class of about 15. Both of us suspected we might be the token women and were very nervous, but my experience put me right in the middle of the class. Some had more hours, but others, such as guys who had come from the military, had less, but they were good hours. Once I joined Northwest, the culture was not what you’d describe today as politically correct, but the male pilots were fine once they realised you could do the job. Some former military guys were dismissive of those of us who had flown light aircraft, but the men who had come from that background got it just as badly. The passengers were often the funniest. One time, an elderly couple walked past and the woman said: “I didn’t think they allowed women pilots.” Her husband retorted: “Dora, where have you been, locked in a closet?” If there was a hard landing, the “woman driver” often got the blame. One time, the captain made a hard landing and I told him: “Don’t worry, they will all assume it was me.” After a few comments from departing passengers, he felt bad and started telling everyone it was him.

How did your career progress?

After a few years as second officer on the 727, I became a second officer on the [McDonnell Douglas] DC-10. The job was not unlike a flight engineer, managing the systems and engine instruments as the third pilot on the flightdeck. You had to do three take-offs and landings in a sim once a year to make sure you could take over in an emergency. In 1986, I became a co-pilot back on the 727, and then, despite vowing I’d never fly as a second officer again, moved to Oregon as a flight engineer on the 747. I finally made it to captain on the 747 in 2004.

What was Northwest like as an employer and how do you think conditions are now for women pilots?

Northwest were excellent. When I had kids, they were very flexible on maternity leave, giving me six months off with each of my children, but I could have taken more. I think in some ways we have gone backwards. You hear these days of women being forced back to work after six weeks. Northwest let you keep your seniority. Some months I would only fly seven days, which was ideal. I could do three transpacific crossings and be done for the month. 9/11 made a big difference. You are locked up in the cockpit now, away from a bathroom. I had a girlfriend who was pregnant and didn’t use the bathroom as often as she should, and ended up with bladder ulcers. Putting bathrooms back on flightdecks [on long-haul aircraft] would make a big difference.