Cathay Pacific says all of its incoming widebody jets will be directed at growth, and that the group will expand to a fleet of over 230 passenger aircraft by 2025.

“The 777s, we don’t have to retire any of those in the next 10 years… The key takeaway is that everything we’re buying at the moment is for growth,” says Hogg. “We want to grow about 4-5% in ASKs yearly.” 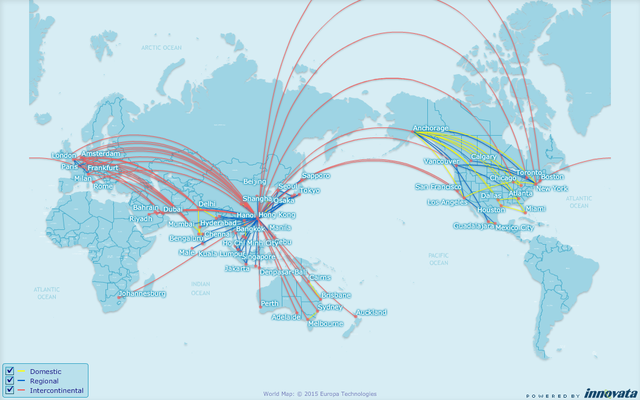 Under Cathay’s strategy, the -900s will primarily be targeted at helping the airline open new points in Europe, and to add a second or third frequency to existing destinations such as Milan and Amsterdam, says Hogg.

The -1000s will meanwhile allow the Hong Kong flag carrier to fly additional frequencies “more cost effectively” to points in North America, and for upgauging on services where traffic rights or airport capacity are constrained.

In the longer term, when the 777Xs arrive, the aircraft will mainly be put on routes to North America and Europe, particularly those with high volumes of both passengers and cargo.

The three incoming aircraft types, together with the relatively young 777-300ERs, will hence form the core of Cathay’s long-haul operations. The 777-9X is expected to fill the role now served by the 747s and 777-300ERs, effectively replacing both types over the longer term.

Hogg says the airline is not considering the A330neo, adding that “broadly speaking, at the moment we’re okay with the range that we’ve got”.

“That is a lot of aircraft we have coming in a relatively short period of time. But we need it because the growth is there,” he says.

“We have the unique advantage to North America and we’re keen to keep selling that market, and we’re joining the number one and two economies in the world. We see China’s outbound tourism particularly as being a long term big volume big growth story.”