Lufthansa’s planned operational trial of the pilot-controlled TaxiBot tow tractor has been delayed by a year due to an unexpected volume of certification tests for the semi-robotic vehicle.

The German carrier had aimed to start a six-month operational trial of the TaxiBot for scheduled Boeing 737 flights at Frankfurt in August 2013. But it has thus far only conducted tests with a decommissioned training aircraft, mainly at night-time – when the airport was closed for regular flights – as the tug has not yet been certificated.

Approval by Israel’s civil aviation authority is due this month – TaxiBot having been developed by Israel Aerospace Industries – with the equivalent European certification likely to follow about two months later, says Gerhard Baumgarten, sales and marketing director at the airline’s ground handling arm, Lufthansa Engineering and Operational Services (LEOS). Baumgarten is also programme director for the airline’s TaxiBot introduction.

The tractor met certification targets in 128 out of 131 areas during tests in April, he says. Israeli officials are due to arrive in Frankfurt between 7 and 11 July to repeat the three remaining tests for the approval.

While trials have thus far led to “many small delays”, there have been “no show-stopping” difficulties, says Baumgarten. But he adds that Lufthansa and IAI underestimated the extent of the required approval testing.

Unlike other tractors that need to certificated by airframers as ground support equipment, the pilot-controlled TaxiBot must satisfy certain aircraft specification regulations.

A central challenge has been the interplay of three computer systems on the tug. While IAI is responsible for the robotic installations, the tractor is produced by French ground equipment manufacturer TLD, with Siemens a main system supplier. 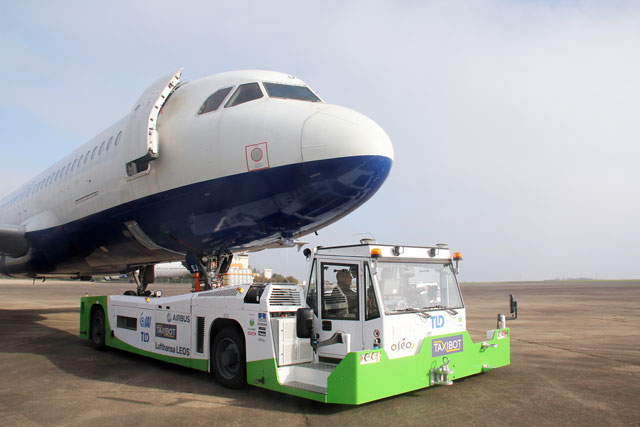 A number of software updates have been necessary to fine-tune the vehicle’s handling, says Baumgarten. A major goal is to achieve a “touch and feel” that for pilots during operation is similar to the aircraft taxiing under own power, he adds.

TaxiBot lifts up the nose landing gear like a conventional tow tractor. But the aircraft's wheels stand on a rotating platform, which translates the pilot's control inputs – via the nose-wheel steering tiller in the cockpit – into directional inputs for the tug. The tractor’s speed is controlled by the pilot via the aircraft's wheel brakes, with a GPS-based navigation system determining maximum velocity and turn radii depending on the vehicle’s location at the airport.

System failure simulation is an area that brought up unexpected issues. When, for example, the team practised the failure of one of the tractor’s motors – each wheel of the hybrid-powered vehicle having its own drive system – the tug’s computer system did not respond to the malfunction as planned, says Baumgartner. Similarly, when the tug driver tested an emergency-stop button in the cab, the tractor did not stop as intended.

Delays have been caused by the requirement of regulators to assess pilot workload when the aircraft’s engines are started during taxiing. Powerplants will need to be started on the way to the runway to ensure minimum warming-up without causing additional waiting before take-off.

While the authority demands that multiple pilots are involved in the assessment – which in turn increases the required timeframe for the trial – the uncertificated vehicle can only be tested on the airport out of operating hours, when starting the aircraft’s engines is not permitted.

“Naturally, such [certification] processes take a bit more time than we initially estimated, but we’re nearly there,” says IAI. The group adds that it does not view the prolonged testing and certification period as a delay, but “rather as a successful, professional process”.

Lufthansa plans to test the TaxiBot initially as a push-back tug. The test aircraft – a de-registered 737-500 normally used for technical training – will thus be ground-operated for a week under dummy flight numbers among the airline’s scheduled flights at its Frankfurt hub.

A second such assessment is planned for later in the summer, and a six-month operational trial with scheduled flights is to begin once European Aviation Safety Agency certification is secured.

This will only cover Boeing 737s. Baumgarten says approvals will be needed for individual aircraft types. Airbus has for two years been separately working with IAI on a certification for its A320 series.

Lufthansa’s accelerated 737 phase-out has no impact on the TaxiBot trial. The airline plans to retire its last 737 in 2016. That fleet comprises nine 737-300s and 13 737-500s, Flightglobal’s Ascend Fleets database shows.

Meanwhile, TLD has completed the assembly and started driving tests of the TaxiBot widebody prototype at its factory near Tours, says IAI.