Cessna’s Citation Latitude flew on 18 February for the first time from the company’s factory in Wichita, Kansas, fulfilling the schedule commitment made after the super-light jet’s launch in October 2011.

The unpainted aircraft – registered as N3765L – flew as high as 28,000ft and up to Mach 0.6 to test basic handling, plus various systems including the flaps, landing gear, anti-ice and pressurization. 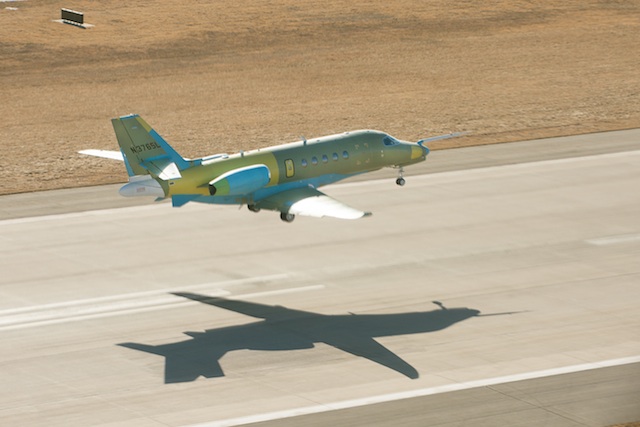 The Latitude follows Cessna’s recent formula for product development, with an emphasis on reusing some technologies while adding capability in new areas.

The Latitude shares the wing, aft section and the Pratt & Whitney Canada PW306D engine with the 12-seat Citation Sovereign+.

The 2,500nm-rnage Latitude also falls neatly within the gap created between the 3,000nm Sovereign+ and the 1,722nm Citation XLS+.

The programme remains on track to be certificated by the US Federal Aviation Administration under Part 25 airworthiness regulations in the second quarter of 2015.

The Latitude will compete in a market segment offering roughly 2,300nm-2,500nm range for seven to nine passengers, which is currently occupied solely by the Bombardier Learjet 75 with the demise of Hawker 750 production last year.

More competition is coming to that segment of the market. Embraer plans to deliver the fly-by-wire Legacy 450 around the second quarter of 2015.

The Latitude is the latest in a string of development milestones by Cessna. The company certificated the Citation M2 and Sovereign+ models at the end of last year. The next goal is to soon certificate the new version of the Citation X, which will become the fastest jet in commercial service with a top speed of M0.925.