In a week marked by reports of a possible Russian-Chinese collaboration to develop a widebody airliner based on the in-development Irkut MC-21, Flightglobal took a look through the archive to find the most notable joint projects with China as a partner.

Chinese aircraft manufacturing began with a short-lived era of Sino-Soviet cooperation spanning most of the 1950s. By July 1954, Nanchang had assembled the first CJ-5 military trainer, which was the Chinese designation for a license-built Yakovlev Yak-18. 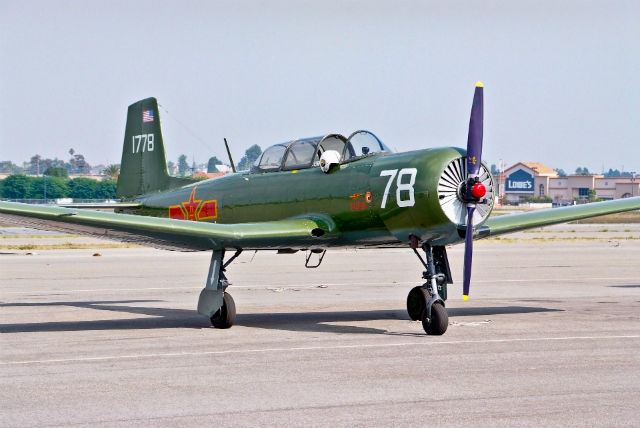 Building on the success of the CJ-5, Shenyang completed assembly of the first licensed-produced copy of the MiG-17 fighter in September 1956, renamed by the People’s Liberation Army (PLA) the J-5, which led to 767 deliveries between 1959 and 1969. The CJ-5 trainer and J-5 fighter proved key “milestones in the development of China’s aviation industry”, wrote Taiwanese scholar Shen Pin-Luen.

In Sino-Soviet relations, technology mainly flowed in one direction, but China made one crucial early contribution. At the dawn of the air-to-air missile era, an AIM-9 Sidewinder missile fired by a Taiwanese F-86 Sabre lodged into a Chinese MiG-17 but did not explode. The Soviets persuaded the Chinese to hand over the Sidewinder, which served Russian engineers like “a university offering a course in missile construction”, wrote Soviet engineer Gennady Sokolovskiy. The Soviets produced a copied version of the AIM-9 called the K-13, which, in turn, the Chinese re-copied as the PL-2, which was followed by upgraded versions known as the PL-3 and PL-5. 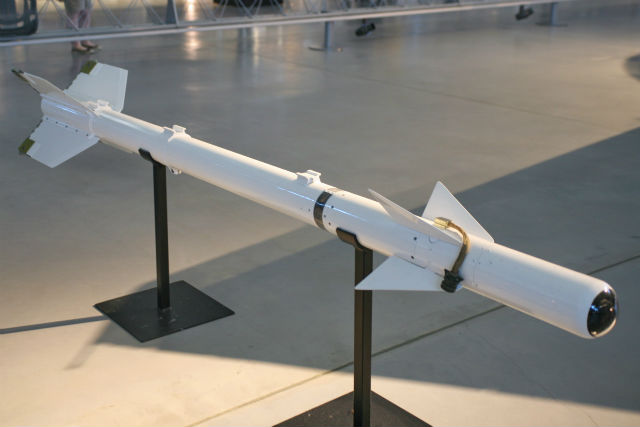 Certainly the most long-lasting artefact of Sino-Soviet co-operation is the Hongzhaji-6 (H-6), a 1950s-era strategic bomber that, like the Boeing B-52, remains in service with potent capabilities. The Soviet Union licensed China’s Xian Aircraft to produce the twinjet Tu-16 Badger bomber in September 1957. The first Chinese-built H-6A made its initial flight on 24 December 1968. Although the Soviet Union withheld long-range strategic missile technologies, the Chinese have since made up it for with the recently reported upgrade of an H-6M equipped with the CJ-10 land-based missile. 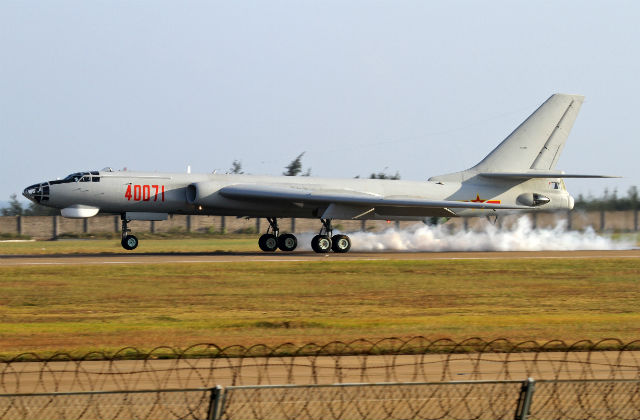 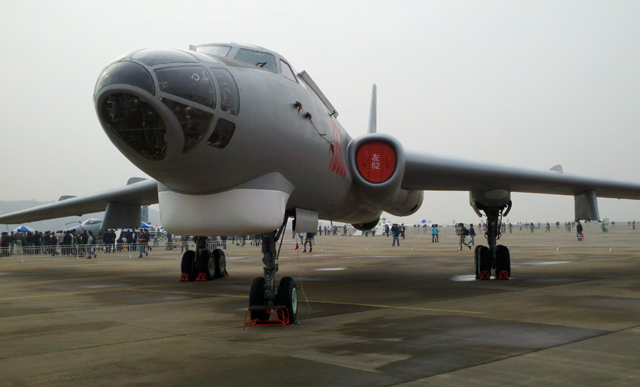 The beginning of the 1960s saw the collapse of Sino-Soviet relations, but China’s attempt to license-build the MiG-19 came in just under the wire. As the country’s first supersonic fighter, the renamed J-6 was a strategic project for the PLA Air Force. Despite Soviet assistance, however, China’s disastrous Great Leap Forward started taking its toll on industry. US National Defense University scholars Phillip Saunders and Joshua Wiseman have written that the result was dozens of J-6 fighters “that were of such poor quality that they were not delivered”. 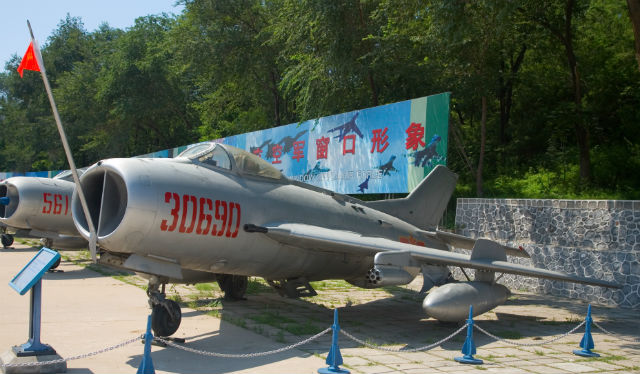 F-6, at the China Aviation Museum

Along with license-produced aircraft, the Soviet-Sino co-operation era also launched China’s jet engine manufacturing industry. Designated by the Chinese as the WP-6, trial production of the Tumanskiy RD-9BF-811, a single-shaft axial turbojet with afterburner, began in 1961 to support the J-6 fighter programme. A follow-on programme to license-produce the Tumanskiy R-11F-300 engine, a Mach 2-capable powerplant for the MiG-21, suffered from the Soviet Union’s abrupt withdrawal from relations with Beijing. As “the Chinese have always maintained, many key Soviet documents [engine design drawings] were not supplied, and 1,097 [pages] that were supplied had errors or omissions”, the late aviation journalist Bill Gunston wrote in Issue 18 of Jane’s Aero Engines.

As Chinese and Soviet interests remained irreconcilable for three decades, China’s burgeoning aviation industry forged ties with Western companies. Sanctions imposed on China after the Tiananmen Square massacre in 1989 changed the balance. Shortly after, the collapse of the Soviet system caused Sukhoi’s visionary chief executive and designer Mikhail Simonov to go entrepreneurial, negotiating a deal with Beijing to sell and then license-produce the Su-27 Flanker as the J-11A. As the scholars Saunders and Wiseman note, China would eventually violate the terms of the deal by reverse-engineering the Su-27 and producing an indigenous model named the J-11B. 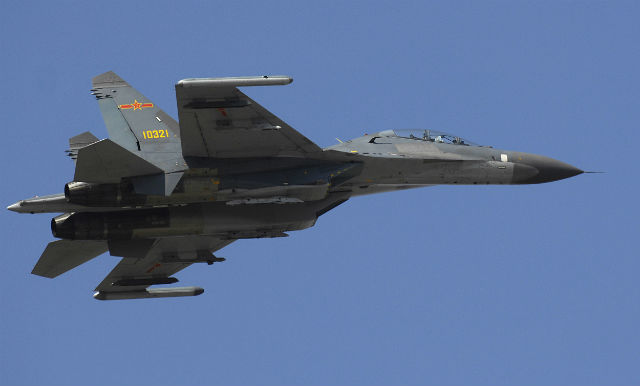 Rumours of Russian involvement have lurked in the shadow of many recent Chinese aircraft development programmes. But the debut of the Changhe Z-10 helicopter gunship appeared to be an indigenous Chinese design until the 2013 Heli-Expo convention. During a Russian Helicopters press conference, chief executive Sergei Mikheyev announced that the Z-10 was based entirely on a previously classified Kamov design called Project 941. Kamov handed over the design to China, which completed the development and testing of the new aircraft by itself, according to Mikheyev, who added that he “wishes success to the helicopter”. 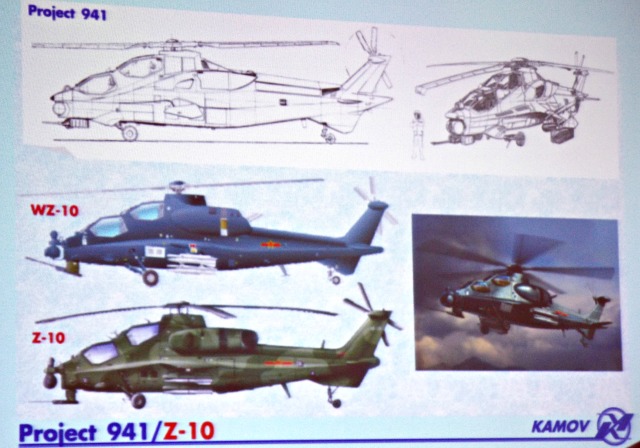 Kicking off a new era of Sino-Russian collaboration, Russian prime minister Vladimir Putin and Chinese president Xi Jinping announced the launch of a super-heavy helicopter development programme. The 38t aircraft will be jointly developed by Russian Helicopters and AVIC, and has been under discussion since at least 2006. The two countries have released projections showing demand for more than 200 helicopters up to 2040.

Military projects have almost exclusively dominated Russian and Chinese co-operation since the 1950s, but that is about to change. By September, Chinese and Russian officials plan to finalise an agreement to jointly develop and produce a new widebody aircraft within 10 years. For Russia, the project is a chance to develop a more marketable replacement for the four-engined Ilyushin Il-96, which failed to attract meaningful orders outside Russia. For China, the deal is an opportunity to flex the country’s growing – albeit still unproven – capability of producing commercial narrowbody aircraft, adding the more daunting skillset of fielding a competitive widebody aircraft.